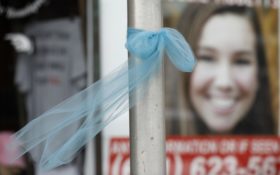 The father of the 20-year-old Iowa woman whose body was found in a cornfield last week wants people to remember her by “celebrating something wonderful” __ not by the way she died.

Mollie Tibbets’ father, Rob Tibbetts, urged the hundreds of people at his daughter’s funeral on Sunday afternoon to remember her passion for life and her desire to help others. Her body was found last Tuesday after a suspect lead police to the field where her body had been since July 18.

To highlight his call to celebrate “wonderful” things, Rob Tibbetts recognized a couple who had just married the day before during his eulogy inside the gymnasium at Brooklyn-Guernsey-Malcom High School. Tibbetts graduated from the school in 2017.

More than 1,000 people filled the gymnasium for Tibbetts’ funeral in the central Iowa city of 1,500 where she grew up. Tibbetts had been staying in Brooklyn during a summer break from her studies at the University of Iowa.

Cristhian Bahena Rivera is charged with first-degree murder in Tibbetts’ death. Authorities have said Tibbetts was abducted while running in July, and an autopsy showed that she died from stab wounds.

Rivera is being held in lieu of a $5 million cash-only bond, and he is suspected of being in the United States illegally. He faces life in prison without the possibility of parole, if convicted.