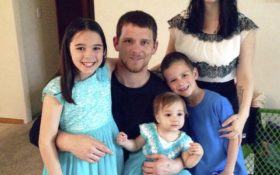 The father of a veteran with post-traumatic stress disorder who was shot at a government clinic in Oregon blames Veterans Affairs for letting down his son.

Gilbert “Matt” Negrete, who served in Iraq and Afghanistan, is in jail in the former timber town of Medford, charged with attempted assault and other crimes after he allegedly displayed a knife during a confrontation at the VA clinic in nearby White City on Jan. 25. A VA guard shot him in the chest.

“First they shoot him, now they’re gonna try to put him away,” his father, Gilbert Negrete, told The Associated Press in a Facebook message. “You would think they would have some concern about us. My son needs help not prison.”

Matt Negrete, the father of three children, had become upset when he went to the clinic for treatment and was told to come back later, said Christine Kantas Herbert, his court-appointed attorney. The sheriff’s office says Negrete was paranoid and incoherent and that investigators were told he hadn’t complained about health care or VA policies.

Brent Brooks, who served with Negrete in the 10th Mountain Division, said he was a “really driven, goal-oriented” soldier. Their unit maintained Kiowa helicopters and sometimes came under mortar fire. In Afghanistan, their second deployment, a mortar round tore apart a wooden shack 20 yards (meters) from their own, wounding all the soldiers inside, Brooks said.

Negrete, whose bail is set at $265,000, faces trial on charges stemming from incidents over three days — including driving under the influence of a controlled substance, attempting to elude police and menacing — that culminated in the clinic incident, said Deputy District Attorney Laure Cromwell.

Gilbert Negrete, who had driven his son to the clinic and witnessed the shooting, said he has recovered from his chest wound but is receiving no psychological help besides medication. Brooks said the VA should have provided better care for his friend and headed off his breakdown.

“He’s being punished because it got to the point where he couldn’t take it anymore.” Brooks said in a telephone interview from Waterloo, Iowa. “It’s sad, because it can happen to any of our veterans. Others try to get help, and wind up dead or in jail.”

Military veterans are 22 percent more likely to kill themselves than non-veterans, and up to 20 percent of Iraq or Afghanistan vets have PTSD in a given year, the VA says.

Herbert acknowledged her client was disorderly at the VA center, but said he was showing symptoms of a psychotic state.

“My belief is that this case illustrates how the VA is not supporting their vets when they return from combat needing help,” she said. “Telling a vet who is experiencing PTSD to come back weeks later when their ‘medication is in’ is not being proactive.”

Negrete’s estranged wife, Alyss Maio, said he was troubled when he returned from his first deployment, and that she and her father-in-law tried to get him help many times.

“Matthew drank heavily upon return from Iraq and was very angry, he barely ever slept and when he did the TV had to be blaring because he couldn’t handle silence,” Maio wrote in a message to AP. “My husband is a good, generous, caring man. He’s an amazing father and loves his children immensely … he just has issues preventing him from being that.”

Gilbert Negrete fears the court will gloss over alleged poor treatment of veterans at the White City VA clinic, which received the lowest score of “1″ — “5″ being the highest — in the VA’s own assessment of its facilities.

“I feel the court will try to bury it so the VA gets away with the way they treat the vets who are truly lost in the system,” Negrete told AP.

A spokeswoman for the clinic in White City did not return calls seeking comment.

The shooting shocked veterans. One Vietnam-era veteran, who described his own problems with clinic staff, said he offered to donate blood when he heard about it.

Herbert said she plans to assert a mental health defense in the case, which is scheduled for trial in July.