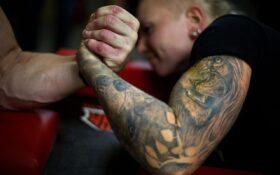 An arm-wrestling contest between a father and son turned violent and led to an 8-hour standoff with Kentucky deputies, authorities said.

Deputies were sent to Zimmerman’s home around 1 a.m. Monday.

Boone County Sheriff’s Office Lt. Philip Ridgell said Zimmerman was intoxicated when he challenged his son to an arm-wrestling competition.

When Zimmerman lost multiple times, he became “agitated” and got into a physical fight with his son, Ridgell said.

Zimmerman grabbed a gun and fired two shots into the ceiling while his son was going upstairs, Ridgell said. No one was injured.

Police did not identify the son or give his age.

When authorities arrived, two family members were outside but Zimmerman refused to leave the home, leading to an 8-hour standoff. Zimmerman surrendered around 8:30 a.m.

It’s unclear whether Zimmerman had an attorney who would comment on his behalf.