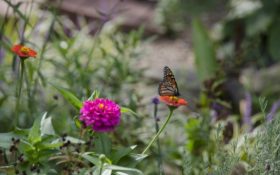 An initiative to market milkweed for the benefit of monarch butterflies — and the farmers in Quebec and Vermont who grow it — is getting a boost from a Canadian parka company that is renewing its commitment to sell coats made with the plant’s floss.

It’s an experimental manufacturing and retailing effort, which started in 2016 when Quartz Co. made and sold a few hundred coats with milkweed fiber as the insulation. After modest growth of its distribution last year, the company is introducing its third generation in September and additional styles in October.

Having served as a testing ground, said Francois-Xavier Robert, Quartz Co.’s chief operating officer, “We feel like we are close to having a major product.”

North America’s severely depleted population of monarchs depends for its survival on milkweed, the sole host for the eggs and only food for the caterpillars. Efforts to restore monarchs rest in part on establishing new lands for the plant to grow. Research indicates plots of milkweed in farmers’ fields are particularly attractive to the monarchs, perhaps more so than roadside stretches and urban patches that butterflies may or may not find.

Quebec researchers developed a way to transform fiber from the long-undesired weed into a lightweight insulation that can replace down and synthetics. But the effort has been bumpy, with the initial producer of the fiber collapsing last year. Harvesting and production technology is immature; hand-picking the crop is often required to yield the silky fibers needed for high-end clothing. Farmers harvest milkweed in the fall after the migrating monarchs have had their fill and moved south.

More than 100 farmers in Quebec and a half dozen in Vermont are growing milkweed for the Monark co-operative, tapping Quartz Co. as their only market for the clothing insulation. Parkas from Quartz, based outside Montreal, are sold in more than 275 stores in 20 countries as well as online.

Robert and his brother, Jean-Philippe Robert, the Quartz president, are entrepreneurs in their early 30s who bought the company in 2015 and built a leadership team of their own generation.

“When we heard about milkweed we jumped on it,” said Francois-Xavier Robert. “It’s part of our generation to be a bit more eco-friendly and responsible. The project seemed pretty aligned with our values.”