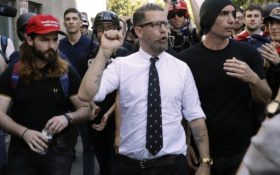 The far-right Proud Boys and their founder, Gavin McInnes, have been banned from Facebook and Instagram because of policies against hate groups, the company announced.

McInnes criticized the ban in an email Wednesday, saying it was a way to drum up “hysteria” prior to the midterm elections next week.

“The left knows they are going to lose this election so they are ramping up the hysteria with fake news and censorship in a last ditch effort to win,” he said.

The Southern Poverty Law Center calls the all-male Proud Boys a hate group, but the Proud Boys reject the label and describe themselves as “Western chauvinists who refuse to apologize for creating the modern world.”

Members of the group brawled with violent alt-left mobs following a speech by McInnes at a Manhattan Republican club on Oct. 12, resulting in arrests of both Proud Boys’ members and alt-left protesters. New York Gov. Andrew Cuomo, a Democrat, criticized the statewide Republican Party for inviting McInnes.

The loss of the platforms will likely hurt the Proud Boys’ ability to recruit.

When asked Wednesday if the social media platforms have been a major recruiting tool, McInnes said, “I guess.”

He now hosts a podcast called “Get Off My Lawn.”