Fan investigated after racial gesture on TV - The Horn News 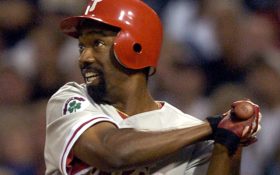 The Chicago Cubs say they are investigating a fan using what appeared to be an offensive hand gesture associated with racism behind a black television reporter who was on the air.

The reporter was Doug Glanville, a former major league outfielder who played three seasons for the Cubs.

Cubs President of Business Operations Crane Kenney said in a statement early Wednesday that the incident occurred during Tuesday night’s game between the Miami Marlins and Chicago at Wrigley Field. He says a person made the gesture while Glanville was working for NBC Sports Chicago.

Kenney says: “Such ignorant and repulsive behavior is not tolerated at Wrigley Field. We are reviewing the incident thoroughly because no one should be subjected to this type of offensive behavior.”

The statement went on to say that “any individual behaving in this manner will not only be removed from the ballpark, but will be permanently banned from Wrigley Field.”

The Associated Press contributed to this article.=