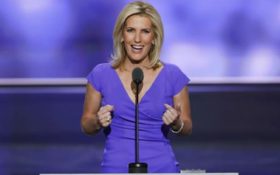 Laura Ingraham’s next book is a tribute to President Donald Trump, and a warning.

The conservative commentator’s “Billionaire at the Barricades: The Populist Revolution from Reagan to Trump” is the first major acquisition by the new All Points Books imprint at St. Martin’s Press. All Points, which will specialize in politics and current affairs, told The Associated Press on Friday that the book is scheduled for Oct. 10.

According to All Points, Ingraham will praise Trump for building a new, populist coalition and provide “unreported details” about his upset win over Hillary Clinton. She will also outline why compromising his “America First” agenda would harm the country and damage his chances for re-election.

Ingraham’s previous books include “The Obama Diaries” and “Power to the People.” She backed Trump in 2016, but has also been critical of some of Trump’s actions in office, calling for tougher policies against China and urging Trump not to attack the conservative Freedom Caucus in Congress.