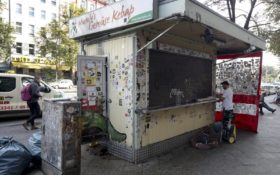 One of Berlin’s most popular kebab stands, in a city famous for its Turkish-style kebabs, has been temporarily shut down after an early morning fire.

The capital’s fire department said Monday it was called to the blaze at Mustafa’s Gemuese Kebap stand at 9 a.m. Firefighters were able to put out the fire in the small street-side stand quickly and nobody was injured, but the structure was damaged and had to be closed for business.

The stand is popular among tourists and Berliners alike, and is renowned for its seemingly perpetual long lines of customers waiting for a meal.

It was not immediately clear how long the business would be shut or how extensive the damage was.

Local media reported that the fire appears to have started in a deep fryer.