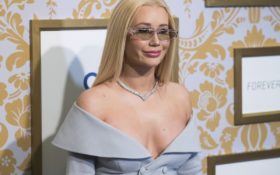 Rappers Iggy Azalea and Playboi Carti have told Atlanta police that $366,000 worth of jewelry was stolen from their rental home.

Amethyst Kelly, who performs as Iggy Azalea, told police the theft occurred Nov. 14, when the back door was unlocked so Jordan Carter, known as Playboi Carti, could get in.

The report says that at some point, they realized a designer bag in which they keep jewelry was missing from the second-floor dining room of their 6,500-square-foot (600-square-meter) home.

It says surveillance video shows a masked gunman wearing gloves coming in the back door just after 9:50 p.m. and leaving within 10 minutes.