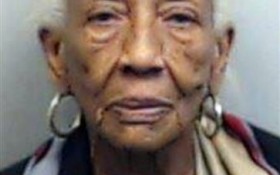 Ten years ago, when she was 75 years old, Doris Payne swore she was done with a lifetime of pilfering jewels across two continents. Several arrests later, in 2013, she said again that she was leaving that life behind.

Police say Payne, now 85, is at it again: She was recently arrested and charged with pocketing a $690 pair of earrings from a Saks Fifth Avenue department store at a mall in Atlanta’s upscale Buckhead neighborhood.

Payne is said to have committed countless thefts over six decades in the U.S. and Europe and has discussed her exploits in media interviews over the years.

A store security guard watching surveillance video saw Payne enter a Christian Dior boutique inside the department store and take the earrings from a standing shelf before quickly leaving, the police report says. She was arrested in the mall, and the earrings were found in her pocket, the report says.

She faces a charge of theft by shoplifting and was booked into the Fulton County jail. She is also wanted on a warrant for a similar offense by the sheriff’s office in Mecklenberg County, North Carolina, and will face extradition, police said.

Shawn McCullers, a lawyer for Payne, said his client has health concerns that need to be taken care of, but he did not elaborate.

“We would look forward to obtaining her release and having her medical needs addressed as soon as possible,” he wrote in an email Tuesday. “When that has occurred we can make a determination on how to proceed.”

The daughter of an illiterate coal miner, Payne was born in Slab Fork, West Virginia. When she was 23, she walked out of a Pittsburgh jewelry store with a diamond valued at $22,000, kicking off a criminal career that would land her behind bars multiple times, including a nearly five-year prison stint in Colorado, she told The Associated Press in 2005.

She developed a winning strategy — dressing nicely, carrying a designer handbag and arming herself with a detailed story — that she used to charm jewelry store employees. Faced with a well-to-do woman with money to spend, store employees would relax their rules and bring out multiple high-value pieces at once, and Payne would quickly slip the expensive baubles on and off until the employee lost track and she could easily leave with one in hand.

Through the years, authorities have said she has used at least 22 aliases and probably got away with her crimes more often than she got caught. The Jewelers’ Security Alliance, an industry trade group, sent out bulletins as early as the 1970s warning about her.

Payne is truly in a league of her own in the pantheon of jewel thieves, Jewelers’ Security Alliance president John J. Kennedy said.

“It’s extraordinarily rare for a criminal to have that lengthy of a career,” he said. “Usually they either stop because they have enough money and they don’t want the risk anymore, or they’re dead.”

Kennedy said people often ask him about her, fascinated and even amused by the story of this elderly woman who has committed so many thefts.

“We’re all laughing, but it’s not funny,” he said. “She goes in and she takes product from people, and it causes a lot of grief for people.”

In a 2005 jailhouse interview with The Associated Press in Las Vegas, Payne remembered her exploits with amusement, throwing back her head and laughing. She stole diamonds because they were easiest, she said, and she was in it for the game, not the money.

She also said in that interview that she was done stealing — at age 75, it was time to stop. Multiple arrests later, in the summer of 2013, she told Matthew Pond, a documentary filmmaker who had chronicled her life, that she wouldn’t steal again, according to a report in the Los Angeles Times two years ago.

Kennedy, for one, wasn’t surprised to hear about her latest arrest.

“I have long said that she is a career criminal, and I doubt if she has any interest whatsoever in stopping,” he said. “When you’re that age and you’re still doing it, you’re not about to stop.”