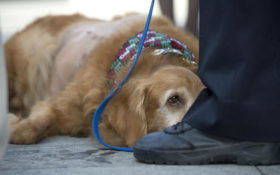 A Connecticut family has been reunited with their dog five years after the beloved pet went missing.

She had lost most of her sight and hearing.

Through a microchip, they identified the dog’s owners as Rick and Michelle Riendeau, of Brooklyn, Connecticut, about 20 miles from Norwich, and reunited them Monday.

An emotional Rick Riendeau said he contacted animal control when the dog, named Lady, first went missing. He said because they live near a wooded area, they feared she may have been killed by a predator, or had wandered off.

He called Lady “the greatest dog we’ve ever had.”