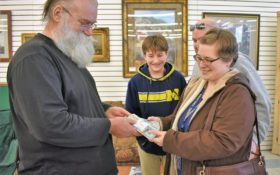 The footstool didn’t feel right. That’s what happens when someone stashes $43,170 inside and apparently forgets about it.

Indeed, the money was discovered inside a footstool that was donated to a Michigan resale shop in Owosso Township.

Howard Kirby bought the piece and other furniture for $70 after Christmas. He was stunned Sunday when his daughter-in-law unzipped the cushion and shouted. After the shock wore off, he began the extraordinary step of returning the money to the former owners.

The footstool was part of a living room set donated to a Habitat For Humanity store by Kim Fauth-Newberry and her husband. The furniture had belonged to her grandfather, Phillip Fauth, who died in July.

Fauth-Newberry said Fauth was a frugal man who always paid in cash, even $9,000 for a new roof. The newly discovered money was separated with paper clips and topped with handwritten notes.

“This is crazy,” Fauth-Newberry said Thursday, staring at stacks of hundred dollar bills.