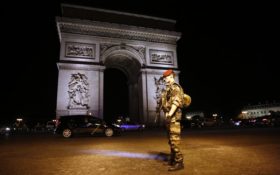 French police detained four family members of a man who was killed after ramming his car into a Paris police convoy, as authorities struggled Tuesday to explain how the Champs-Elysees attacker was able to keep his gun permit despite being monitored for links to extremism.

The Paris prosecutor’s office said Tuesday that the four suspects were detained overnight in the anti-terrorism investigation into Monday’s attack. The incident on one of the French capital’s busiest shopping and tourist districts rattled the city anew after multiple attacks targeting security forces.

Two police officials identified the attacker as 31-year-old Adam Djaziri from the Paris suburb of Argenteuil, and said he had been on police radar for ties to radicalism.

The prime minister said Tuesday that the man’s gun permit was initially issued before he was flagged to authorities.

Asked on BFM television why this attacker’s permit wasn’t rescinded, Prime Minister Edouard Philippe said that “if you take away a permit from someone who is the subject of surveillance or being monitored, he will quickly understand why it has been taken away. … It’s a difficult decision.”

Philippe dismissed appeals by gun clubs to have access to such surveillance information, saying that would hinder intelligence efforts that rely on secrecy to determine whether someone is plotting a crime.

Djaziri set off a fiery blast when he drove his car packed with arms and explosives into police, authorities said. Gendarmes jumped out of the vehicle, ran to the car, smashed its windows and pulled out the driver in an apparent attempt to save him, according to witness accounts.

No one else was injured, and the Champs-Elysees reopened overnight after being closed for hours for security measures.

The interior minister said the attack shows the threat level remains high and justifies an extension of a state of emergency in place since 2015. The government will discuss extending the measure through Nov. 1 at a Cabinet meeting Wednesday.