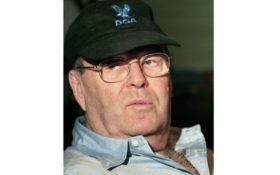 Peter Masterson, the playwright, filmmaker and actor with a knack for farce and drama whether co-writing the Tony-winning musical “The Best Little Whorehouse in Texas” or directing the movie adaptation of “The Trip to Bountiful,” has died.

Masterson’s son, also called Peter, said his father died Tuesday from complications from Parkinson’s disease. He was 84 and died at his home in Kinderhook, New York.

Born Carlos Masterson, but known as Peter because his father preferred that name, the Houston native often worked with family members and was drawn to projects in his native Texas.

His cousin was the-Texas born playwright Horton Foote, who wrote the stage version of “The Trip to Bountiful,” the lyrical story of an elderly woman in Houston who longs to return to her home community. Geraldine Page won an Oscar for her starring performance in the 1985 film, which also featured Rebecca De Mornay and John Heard.

Masterson earlier had success in the theater as one of the creators of “The Best Little Whorehouse in Texas,” inspired by the real-life Chicken Ranch brothel. (Customers sometimes paid in chickens). The story began as a 1974 Playboy article by Larry L. King and was expanded into a musical after a dinner party conversation among Masterson, King and songwriter Carol Hall, who died last fall.

Although described by The New York Times as “an erratic and ambling, if sleekly produced, business,” the play ran more than three years on Broadway after opening in 1978, and Masterson received Tony nominations for direction and choreography. His wife, Carlin Glynn, won a best actress Tony.

A 1982 film adaptation, starring Burt Reynolds and Dolly Parton, was a box office success but also a troubled production. Masterson was supposed to help direct and write the movie, but Universal replaced him with Colin Higgins. Meanwhile, Reynolds and Parton reportedly didn’t get along, with Parton later calling the film a “nightmare.”

Masterson also worked with his daughter, Mary Stuart Masterson, known for such movies as “Fried Green Tomatoes.” She made her debut in “The Stepford Wives,” the 1975 film version of Ira Levin’s novel about the extreme submissiveness of women in a Connecticut suburb. Peter Masterson and Katharine Ross starred as newly arrived residents of Stepford, with Mary Stuart Masterson playing one of their two children.

His other acting credits included “In the Heat of the Night,” ″The Exorcist” and “Gardens of Stone.” He also helped write “The Best Little Whorehouse Goes Public,” a poorly received sequel to “Best Little Whorehouse in Texas,” and directed such films as “Convicts,” starring Robert Duvall, and “Whiskey School,” which featured Mary Stuart Masterson.