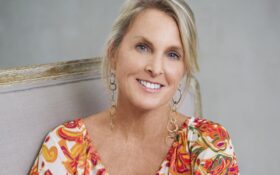 Elin Hilderbrand, known as the queen of the beach read, plans to retire from writing novels in 2024.

The best-selling author’s latest book “Golden Girl” is her 27th book and is now available. Hilderbrand says she deliberately wants to quit while there’s still an appetite for her writing.

“A lot of people will follow a writer for a long time and then inevitably they will turn out a book that is not as good as the others,” Hilderbrand told The Associated Press in an interview last month. “I’ve always said to myself, ‘I will not do that. I will make each book better and better or different in some way.’ I feel myself coming to my natural end of my material.”

Hilderbrand, whose past books include “28 Summers,” “The Identicals” and “Here’s to Us” have become a summertime staple, with cover art featuring an idyllic beach scene and stories set in and around the Massachusetts island of Nantucket, where she lives. She says those are the novels she will definitely stop writing in 2024, but someday she may return with a memoir or a cookbook.

Despite plans to step back from writing, Hilderbrand, 51, wants to stay in the book world. Hilderbrand wants to become a book influencer, where she recommends books to others.

To get started, Hilderbrand has created a book club on the subscription site Literati. Hilderbrand joins curators including Stephen Curry, Richard Branson, Malala and Cheryl Strayed who also offer their own book clubs on Literati.

“I’m doing a book club called The Beach and Beyond. What I would like it to be, is smart, fun, engrossing books, not too, too heavy, not too gritty or serious or dark, but not silly, fluffy either,” she said. “I’m trying to find books that haven’t been picked by the big morning show book clubs,” said Hilderbrand, who is also interested in spotlighting female writers.

Hilderbrand, who says she appreciates what actors and TV personalities Oprah Winfrey, Reese Witherspoon and Jenna Bush have done for the publishing industry with their own book clubs, believes authors are the best people to recommend books because they know good writing.

“You will not find anybody who reads more critically than a writer. And I would be shocked if you found anybody who loves to read more than a writer,” said Hilderbrand. “The biggest book influencer in the country should not be an actress, nor should it be even Oprah. I love Oprah. I love Reese Witherspoon,” said Hilderbrand. “I really feel like book influencing should be done by writers. And so I should be that person.”

The author spoke to the AP before being criticized for a passage in “Golden Girl” in which a character referenced living in an attic like Holocaust victim Anne Frank. Hilderbrand apologized and her publisher agreed to remove the reference from digital versions and future printings.