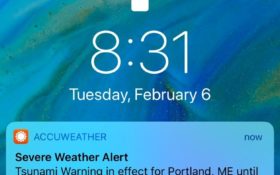 A private forecasting company took a routine National Weather Service test message and sent it to people’s phones as an official tsunami warning Tuesday morning, the latest in a spate of false alarms since last month.

The National Tsunami Warning Center sent the test message around 8:30 a.m. Tuesday. Users of the popular AccuWeather app then got a false tsunami alert. The message was sent to phones throughout the East Coast, the Gulf of Mexico and the Caribbean.

State College, Pennsylvania-based AccuWeather blamed the National Weather Service for the false alarm, saying the weather service “miscoded” a test message as a real warning. The word “TEST” was in the header of the message, but the private forecaster said it passes along weather service warnings based on a computer scan of codes.

“Tsunami warnings are handled with the utmost concern by AccuWeather and it has sophisticated algorithms to scan the entire message, not just header words, as from the time of a warning to the actual event can be mere minutes,” the forecaster said in a statement.

“AccuWeather was correct in reading the mistaken NWS codes embedded in the warning. The responsibility is on the NWS to properly and consistently code the messages, for only they know if the message is correct or not,” AccuWeather said.

The weather service said earlier Tuesday that it’s looking into why the test message was transmitted as a real alert. It did not immediately respond to AccuWeather’s assertions.

The weather service said the false alarm didn’t appear on any of its communications channels, but AccuWeather said some NWS web pages did show the warning.

Jeremy DaRos, of Portland, Maine, said the alert made him “jump” because he lives a stone’s throw from the water and was aware of recent spate of small earthquakes that made the alert seem plausible.

“Looking out the window and seeing the ocean puts you in a different frame of mind when you get a tsunami warning,” he said. He said that after clicking on the push notification for details he realized it was just a test.

The false alert didn’t create nearly as much panic as last month’s bogus ballistic missile warning in Hawaii. The state employee who sent the alert was fired.