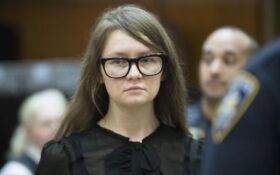 Convicted swindler Anna Sorokin spoke to The New York Times about how important it is to her to remain in New York despite risks of deportation.

Sorokin’s case became the basis for the series “Inventing Anna” on Netflix. She was released Friday from U.S immigration custody to house arrest. She told the Times she would feel like she was “running from something” if she were to let herself be deported to Germany.

“Letting them deport me would have been like a sign of capitulation — confirmation of this perception of me as this shallow person who only cares about obscene wealth, and that’s just not the reality.” Sorokin told the Times late Friday night.

Last week, an immigration judge cleared the way for Sorokin, 31, to be released to home confinement while the deportation fight plays out. Now, she is wearing an ankle monitor after posting a $10,000 bond.

Sorokin for years used the name Anna Delvey to pass herself off as the wealthy daughter of a German diplomat, and lied about having a $67 million (68 million euros) bankroll overseas to create the impression that she could cover her debts, prosecutors said.

After serving three years in prison for conning $275,000 from banks, hotels, and rich New Yorkers to finance her luxurious lifestyle, Sorokin was detained by immigration authorities last year who argued she had overstayed her visa and must return to Germany, where she is a citizen.

When asked about what she plans to do now, Sorokin told the Times she’s working on her own podcast, which hasn’t come to fruition yet, and that she wants to work on criminal justice reform to highlight the struggles of other young women.