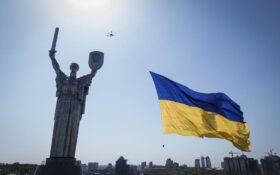 Russian President Vladimir Putin ordered a major buildup of his country’s military forces Thursday in an apparent effort to replenish troops that have suffered heavy losses in six months of bloody warfare and prepare for a long, grinding fight ahead in Ukraine.

The move to increase the number of troops by 137,000, or 13%, to 1.15 million by the end of the year came amid chilling developments on the ground in Ukraine:

— Fueling fears of a nuclear catastrophe, the Zaporizhzhia power plant in the middle of the fighting in southern Ukraine was cut off from the electrical grid after fires damaged the last working transmission line, according to Ukrainian authorities. The incident caused a blackout across the region. The plant was later reconnected to the grid, a local Russian-installed official said.

— The death toll from a Russian rocket attack on a train station and the surrounding area on Ukraine’s Independence Day climbed to 25, Ukrainian authorities said. Russia said it targeted a military train and claimed to have killed more than 200 Ukrainian reservists in the attack Wednesday.

Putin’s decree did not specify whether the expansion would be accomplished by widening the draft, recruiting more volunteers, or both. But some Russian military analysts predicted heavier reliance on volunteers because of the Kremlin’s concerns about a potential domestic backlash from an expanded draft.

The move will boost Russia’s armed forces overall to 2.04 million, including the 1.15 million troops.

Western estimates of Russian dead in the Ukraine war have ranged from more than 15,000 to over 20,000 — a staggering amount, and far more than the Soviet Union lost during its 10-year war in Afghanistan. The Pentagon said last week that as many as 80,000 Russian troops have been killed or wounded, eroding Moscow’s ability to conduct big offensives.

The Kremlin has said that only volunteer contract soldiers take part in the Ukraine war. But it may be difficult to find more willing soldiers, and military analysts said the planned troop levels may still be insufficient to sustain operations.

Retired Russian Col. Retired Viktor Murakhovsky said in comments carried by the Moscow-based RBC online news outlet that the Kremlin will probably try to keep relying on volunteers, and he predicted that will account for the bulk of the increase.

“A draft won’t help that, so there will be no increase in the number of draftees,” the state RIA Novosti news agency quoted Leonkov as saying.

Fears of a Chernobyl-like disaster have been mounting in Ukraine because of fighting around the Russian-occupied Zaporizhzhia plant. Ukraine and Russia have accused each other of shelling the site.

It was not immediately clear whether the damaged line in Thursday’s incident carried outgoing electricity or incoming power to operate the plant, including the vital cooling system for the reactors. Ukrainian authorities said a backup power line using electricity from another, non-nuclear plant remained connected and was in use.

While the incident apparently didn’t affect the reactors’ cooling systems — whose loss could lead to a meltdown — it stoked fears of disaster.

“The situation is extremely dangerous,” Ukrainian Foreign Minister Dmytro Kuleba said. “I’m receiving reports that there are fires in the forest near the power plant. We still have to examine this issue more.”

Elsewhere on the battle front, the deadly strike on the train station in Chaplyne, a town of about 3,500 in the central Dnipropetrovsk region, came as Ukraine was bracing for attacks tied to the national holiday and the war’s six-month mark, both of which fell on Wednesday.

The deputy head of the Ukrainian presidential office, Kyrylo Tymoshenko, did not say whether all of the 25 people killed were civilians. If they were, it would amount to one of the deadliest attacks on civilians in weeks. Thirty-one people were reported wounded.

Witnesses said some of the victims, including at least one child, burned to death in train cars or passing automobiles.

“Everything sank into dust,” said Olena Budnyk, a 65-year-old Chaplyne resident. “There was a dust storm. We couldn’t see anything. We didn’t know where to run.”

The dead included an 11-year-old boy found under the rubble of a house and a 6-year-old killed in a car fire near the train station, authorities said.

Russia’s Defense Ministry said its forces used an Iskander missile to strike a military train carrying Ukrainian troops and equipment to the front line in eastern Ukraine. The ministry claimed more than 200 reservists “were destroyed on their way to the combat zone.”

Following attacks in which civilians have died, the Russian government has repeatedly claimed that its forces aim only at legitimate military targets. Hours before the bloodshed at the train station, Russian Defense Minister Sergei Shoigu insisted the military was doing its best to spare civilians, even at the cost of slowing down its offensive in Ukraine.

In April, a Russian missile attack on a train station in the eastern Ukrainian city of Kramatorsk killed more than 50 people as crowds of mostly women and children sought to flee the fighting. The attack was denounced as a war crime.

In Moscow on Thursday, Dmitry Medvedev, the secretary of Russia’s Security Council, said Western hopes for a Ukrainian victory are futile and emphasized that the Kremlin will press home what it calls the “special military operation,” leaving just two possible outcomes.