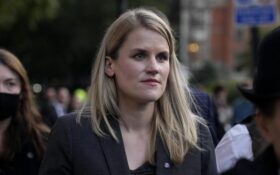 The former Facebook manager who startled the world this fall by leaking tens of thousands of internal documents and accusing her former employer of caring more about money than about public safety has a book deal.

Little, Brown and Company announced Thursday that it had acquired a planned memoir, “offering a critical examination of Facebook,” by Frances Haugen. The book does not yet have a title or release date. Financial terms were not disclosed.

“During my time at Facebook I realized a devastating truth: almost nobody outside of Facebook knows what happens inside of Facebook. They operate in the dark,” Haugen said in a statement.

“They win by keeping their systems closed without oversight or transparency, by shrouding their operations in secrecy and PR spin. I came forward because I believe that every human being deserves the dignity of the truth — and the truth is that Facebook buys its astronomical profits by sacrificing our safety. But it does not have to be this way — these problems are solvable. We can have social media we love that also brings out the best in humanity. My hope is that this book will show us the way.”

Haugen’s prominence has been cited as a sign of a rising wave of Big Tech whistleblowers. In Senate testimony in October, Haugen alleged that the company had failed to make changes to Instagram even after internal research showed apparent harm to some teens and had not done enough to combat hate speech and misinformation. Facebook CEO Mark Zuckerberg has disputed her accounts, calling them a “false picture” of the company, but shared her view that the government needed to update its internet regulations.

A native of Iowa City, Iowa, Haugen is a data expert with a degree in electrical and computer engineering from Olin College and a master’s degree in business from Harvard. She already had 15 years of experience with tech companies, including Google and Yelp, before being recruited by Facebook in 2019 and joining in its civic integrity unit as lead product manager.

After the November 2020 election, Facebook eliminated the civic integrity unit, a decision that Haugen said helped convince her that the company could not be trusted to “actually invest what needs to be invested to keep Facebook from being dangerous.” She left Facebook in May, but not before spending weeks reviewing and copying documents.