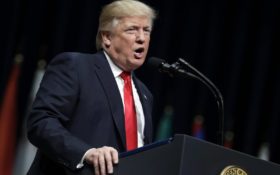 President Donald Trump has proposed a popular reform to banish Washington D.C.’s permanent political class and give control of Congress back to the American people.

Trump is putting his muscle behind the term limits movement to shorten how long career politicians can stay in Congress, the House, and the Senate.

““I recently had a terrific meeting with a bipartisan group of freshman lawmakers who feel very strongly in favor of Congressional term limits,” Trump tweeted on Monday. “I gave them my full support and endorsement for their efforts.”

He closed with the hashtag his massive campaign rallies made famous: “#DrainTheSwamp.”

I recently had a terrific meeting with a bipartisan group of freshman lawmakers who feel very strongly in favor of Congressional term limits. I gave them my full support and endorsement for their efforts. #DrainTheSwamp

Trump is a street-smart businessman who knows not all of the Deep State is hidden. Some of its biggest tentacles come out of the country’s 535 congressional offices – and he thinks term limits might just cut off every single one of them.

He knows how the game is played — powerful political interests put their money behind whoever promises to most slavishly serve their interests – not the American people, and definitely not the Constitution. Their megabuck donations give their candidate an unbeatable edge.

Once he’s in office, he appoints his friends and cronies – and their kids and board members – to work on Capitol Hill. In his palatial offices, they write laws that help their donors – and screw everybody else.

They make fat salaries – at least $174,000 a year, even more when they’re leadership – and the benefits are second-to-none.

They’re exempt from ObamaCare and most other laws they pass. Laws are for the little people, not them!

They qualify for lifetime pensions once they’ve served just five years in office. That means the worst one-term senator in history collects a government check for life the day he turns 62.

They’re surrounded by money, power, the finest offices and restaurants, and a full entourage of donors and interns who want to please them in every way possible.

Through the years, Congressmen have talked about voluntary term limits. But once they get used to the perks and power of D.C., they never leave the swamp.

It’s a pretty sweet life. So, it’s obvious why no one wants to give it up – and almost none ever has to.

Congress currently has a 16% approval rating, and a 96% re-election rate.

As long as they play the game, no challenger can get the money and backing to pry them out of office. Anyone who tries gets buried in an avalanche of megadonor dollars and media lies.

No wonder some politicians serve way after they’re physically, let alone mentally, able to do the job. Detroit Congressman John Conyers stayed in office 53 years – and he wants his son, John Conyers III, to replace him in his ultra-Democrat House district.

In the rare case that a Congressman retires, he doesn’t go away – he just moves a few blocks away and becomes a K Street lobbyist.

He has all the inside information he needs to keep his former colleagues walking the straight and narrow for the powers that be – and he rakes in millions while still cashing his pension check.

But if Congress had term limits, politicians couldn’t live off taxpayers as a way of life.

They couldn’t blackmail or leverage their old buddies in Congress, because their “distinguished colleagues” would be turned out of office, too. You can’t sell influence if you don’t have any.

The incumbent network is so deep that some people believe the only way to get rid of them is to pass term limits.

Ross Perot supported them. Donald Trump backed the idea on the campaign trail, too. He said people should be limited to six years in the House and 12 in the Senate.

Now, he’s talking with a few of the good, insurgent Congressmen to start draining the legislative branch of the Swamp.

“We’re going to combine our bills together and really try to push the thing. I think that would be a complete, complete paradigm shift,” said Wisconsin Republican Mike Gallagher.

He’s joined by a bipartisan group that includes Republicans Brian Fitzpatrick of Pennsylvania and Jodey Arrington of Texas – and Democrats Vicente Gonzalez of Texas and Ro Khanna of California.

It’s an uphill battle. If their bill passes, they’ll have to amend the Constitution.

FW: For your eyes only (personal matter) [sponsored]

There’s no doubt that their heart is in the right place, and they’re dug in for a David-and-Goliath fight.