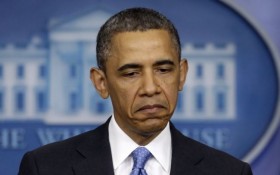 When Nicole Landers met with her daughter’s principal, she had only one question: Why is my 11-year-old girl being groped everyday in class?

Although her daughter’s assailant had been reported several times, he had never been punished a single time.

But Landers was shocked when the principal told her to her face that the groper would never get punished because, thanks to a controversial Obama-era rule, the sexual offender “has rights” – more rights than her little girl.

“I don’t understand how you can look at my daughter and tell me that she should tolerate her body parts being touched by this other student,” Landers said.

Under one of his controversial policies, the school district  be would disciplined – even lose all of its federal funding – if it punishes violent students, drug dealers, or predators.

And even though Obama’s been out of office for 16 months now, his policy is still getting poor children and their teachers groped, sexually molested, and beaten up – and letting abusers get away without even a slap on the wrist.

It started in 2010, when the Obama administration warned school districts against suspending or calling the police on unruly students.

But it really kicked into high gear four years later, when the Department of Education and the civil rights office wrote new guidelines that resulted in schools keeping violent students in the classroom.

In the “Rethinking Discipline” memo, Obama applied a doctrine called “disparate impact”: If school districts suspend too many minority students, Obama would prosecute them for “unlawful racial discrimination in school discipline” – even if it’s an overwhelming minority school district.

Instead of protecting students who want to learn from being the victims of gangs or street thugs, Obama told schools to use “positive behavioral intervention supports” (PBIS).

Give violent teenagers nice talks in the office! Make them know they’re loved! Just don’t suspend them or call the cops to stop their rampages.

The school districts got the message, and young kids – especially minority children from poor neighborhoods – started paying the price.

“Students and staff are physically, verbally, emotionally, and mentally, sexually abused every single day in the building,” Kerstin Westcott told the Green Bay Area school board.

The Obama administration cracked down on Oklahoma City schools and forced them to tell teachers not to refer a student for discipline “unless there was blood.”

But by the time there’s blood, it’s too late. New York City’s far-left mayor, Bill deBlasio, passed an easy-going policy for the Big Apple’s schools – and it got a student stabbed and killed during his history class.

It was the first murder in the city’s public schools in 20 years, and the number of robberies and arsons inside the city’s schools exploded.

“New state Education Department data reveal there were more rapes and other sex crimes at NYC public schools during the 2017-2018 school year than any year since 2007,” Paul Sperry reported in the New York Post.

But the school only reported 10 suspensions that year, so – as far as Obama is concerned – mission accomplished.

Gary Favors, a black teacher in Cincinnati also said that black students are “not being discriminated against” in his classroom. The only thing he punishes is their “behavior.”

It’s a problem from coast-to-coast. Teacher surveys say the change isn’t working, from California to Tampa Bay, from Indianapolis to Denver, and everywhere in between.

One teacher revealed that violent students were given so much freedom in Milwaukee’s public schools that teachers were “offering me marijuana to help me cope with the job.”

And parents agree. “These policies are highly dangerous,” Landers told Education Secretary Betsy DeVos. “They are turning our schools into war zones.”

But a year after Obama left office, the feds still have more than 300 school districts under investigation for violating his dangerous rules.

Finally, the Trump administration decided that the Parkland shooting was the final straw. They are thinking seriously about pulling the plug on this Obama policy and restoring sanity in school.

Sources say that DeVos is considering repealing the rule this year, but the Trump administration doesn’t want to go halfway on this.

President Donald Trump wants to pull this policy up by the roots and salt the earth afterwards.

It’s just waiting to get the wording air-tight, to survive the legal challenge that the ACLU has already threatened.

Students and parents everywhere – but especially in schools riddled with poverty and crime – should give thanks that Trump is about to make schools safe again.