EXPOSED! Top Dem linked to veteran's death (he was a father!) - The Horn News 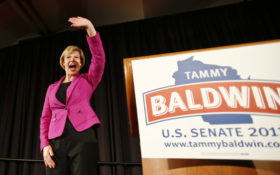 A U.S. senator’s office knew that the Veterans Association over-prescribed painkillers that caused a veteran to overdose, but the office did nothing about it. Now veterans groups are going all-out to stop the Democrat from returning to Washington this November.

Doctors at the Tomah Veterans Administration Medical Center handed out so many heavily addicting opioids that it earned the nickname “Candy Land.”

Vets called its chief of staff, psychiatrist Dr. David Houlihan, the “Candy Man” because he and his staff flooded U.S. vets with so many potentially deadly pills.

Under Houlihan’s direction, the Wisconsin office went from prescribing 50,000 oxycodone pills a year to 712,000 pills annually.

One of the people who came to Tomah for help was Jason Simcakoski, a 35-year-old Marine veteran with severe anxiety – and a major addiction to painkillers. Together, they had started to ruin his relationship with his wife and their 11-year-old girl.

Doctors at Tomah put him on 15 different pills, including a brand new opioid – until he overdosed in the psych ward in August 2014.

His death triggered an inspector general’s report – you can read it here – which found “serious concerns” about the number of painkillers being prescribed in the center.

Senator Tammy Baldwin, D-Wisconsin, had a copy forwarded to her office within days of his death from “mixed drug toxicity.”

But instead of lifting a finger to save her state’s veterans, her office sat on the report for five months.

The situation became so desperate that a former Tomah employee started begging her staffers to do something. Ryan Honl, a West Point graduate and Gulf War vet, had seen enough death before he got to Tomah.

“Do you think that’s proper that a nurse practitioner…is ranked the number one prescriber of opiates out of 3,206 physicians in the (region)?” Honl asked Baldwin’s office in an e-mail on November 24.

He asked “when will Senator Baldwin say ‘enough is enough’ and push for better treatment of veterans?” in another of his many, many e-mails to the office. “Is it really going to take the media to shame Senator Baldwin and the VA to finally give veterans the proper care they deserve?”

It turns out, that was exactly what it took. Baldwin didn’t ask for an investigation until after the Center for Investigative Reporting went public with a major exposé about the center on January 2015.

USA Today found out that Baldwin’s office had the report since August 29 but bottled it up.

When cornered, Baldwin said she couldn’t remember if she had been told about Honl’s pleas for someone to help strung-out vets.

Instead of accepting responsibility, Sen. Baldwin blamed it all on her staff – but didn’t even fire the main culprits.

She paid a few high-powered D.C. attorneys to produce an “external report” that “didn’t find anything willful or unethical.”

Baldwin docked her chief of staff one month’s pay, shuffled around two other employees, and issued a non-apology.

“Mistakes were made,” she said. Her statement even went on to brag about “my reputation for excellent casework.”

A veteran with a little girl was dead, and swarms of people had been turned into “zombies” by VA-prescribed drugs, but as far as she was concerned: Problem solved.

Three years later, America’s fighting men and women don’t think so. Concerned Veterans for America is taking out ads against Baldwin, who is up for re-election in the heavily Democratic state this fall.

Baldwin’s actions, and her arrogance, are shameful. Soldiers who risked everything for this country and deserve first-class medical care and a government that stops quacks from poisoning them once they return stateside.

Indifference to America’s veterans cost one young man his life. This November, Tammy Baldwin deserves to pay the price.