Exposed! The secret 26 Dem lawmakers DON'T want getting out... - The Horn News 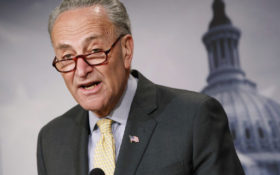 Senate Minority Leader Chuck Schumer and 25 top Democratic lawmakers sent a threatening letter to Senate Majority Leader Mitch McConnell on Monday — and between the lines was hidden a secret so shocking, it could end their political careers for good.

It the letter, these 26 liberal leaders warned congressional conservatives against approving President Donald Trump’s border wall funding, and promised Democrats would shut down the government in April if they did.

But there’s a MAJOR secret these Democratic leaders don’t want voters to know.

Schumer and 25 other Democrats actually voted for increased border security in 2006 when President George W. Bush  (including walls!) proposed the Secure Fence Act which built a 700 mile fence at the United States border with Mexico.

Hypocrisy, thy name is liberalism.

What will happen to these liberal career politicians when their bleeding heart voter base find out they’ve been voting for U.S.-Mexico border security for years? Will they be called racists and screamed by anarchists and socialists?

The letter to McConnell says it’s too premature to rush Trump’s upgrades through… an odd statement when they voted to expand existing border fence a decade ago and voted for legislation funding its construction.

While they supported our national security then, Democrats are now willing to put our economy on the line if they don’t get what they want.

The letter also warns against adding other “poison pills” in Trump’s budget such as provisions to roll back government overreach in environmental or consumer regulations and demands more money for domestic programs like welfare.

“We believe it would be inappropriate to insist on the inclusion of [border wall] funding in a must-pass appropriations bill that is needed for the Republican majority in control of the Congress to avert a government shutdown so early in President Trump’s administration,” said the letter, which was provided to The Associated Press.

The letter from Democrats implicitly threatens a filibuster showdown — and potential government shutdown.

At issue is a huge package of leftover spending bills for the budget year that began in October. Congress faces an April 28 deadline to complete the measure and avert a partial government shutdown. It’s separate from Trump’s budget submission for the 2018 budget year that begins on Oct. 1

These liberals are going to do everything they can to stop Trump’s wall, including shutting down our government and potentially losing our country billions of dollars.

But these Democratic lawmakers are desperate to hide the fact that they once supported such a measure.

Now that their dirty little secret it out, will voters finally throw them out?

— The Horn editorial team and The Associated Press contributed to this article.