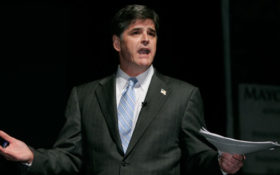 Hannity dismissed the judge’s attack, saying at most he exchanged “10 bucks” to formally establish attorney-client privilege during a private conversation about real estate investing — and that no other money had exchanged hands between him and Cohen.

The shocking move left many wondering why the federal judge felt the need to reveal Hannity as the third client of Cohen — and some far-right critics say they have the answer.

The Hannity-reveal proves Wood is biased and is using the Cohen case to advance the so-called “witch hunt” against President Donald Trump’s administration, critics argue. And they’ve cited Wood’s intimate connections to high powered liberal insiders like the Clintons as evidence.

It’s true that Wood’s link to the Clintons goes back decades. In fact, her work was so highly thought of that she was nominated to be former President Bill Clinton’s Attorney General in 1993.

She was forced to withdrawal from consideration after it was revealed she employed numerous illegal immigrants to take care of her house and child.

But that didn’t stop Wood from forming close relationships with other liberal leaders over the decades, critics claim.

Can’t make this stuff up https://t.co/msLIZs28oU

During his court case on Monday, Cohen argued that his client list was protected by attorney-client privilege — which Wood flatly rejected.

“I understand that he doesn’t want his name out there. That’s not enough. I order you to disclose the client now,” she said.

Hannity responded to the reveal with the following statement: “Michael Cohen has never represented me in any matter. I never retained him, received an invoice, or paid legal fees. I have occasionally had brief discussions with him about legal questions about which I wanted his input and perspective.”

“I assumed those conversations were confidential, but to be absolutely clear they never involved any matter between me and a third-party,” Hannity’s statement continued.

“In response to some wild speculation, let me make clear that I did not ask Michael Cohen to bring this proceeding on my behalf, I have no personal interest in this proceeding, and, in fact, asked that my de minimis discussions with Michael Cohen, which dealt almost exclusively about real estate, not be made a part of this proceeding.”

Do you agree with critics that Wood is biased? Vote here —

Should Judge Kimba Wood recuse herself?