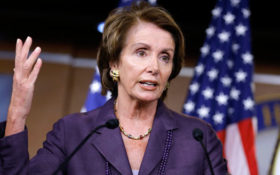 House Speaker Nancy Pelosi doesn’t trust President Donald Trump and his administration regarding the escalating Iran tensions, so she asked a favor from old friends instead.

But Brennan doesn’t have a security clearance. The White House stripped Brennan of his security clearance in Aug. 2018 because he was using secret information for personal profit, Press Secretary Sarah Huckabee Sanders said at the time.

That means these days, Brennan is nothing but a contributor for CNN.

In other words, Pelosi is ignoring the warnings of the Central Intelligence Committee… in favor of a CNN analyst’s information, which he’s gleaned from public sources.

If Brennan does have secret information on Iran, he gained it illegally.

If not, Pelosi is differing to a CNN analyst (over the CIA) for the most important foreign policy decisions in the past decade.

Brennan told Democrats that while Iran wants to avoid conflict, but that the country’s leadership will not capitulate to Trump. Sherman warned that the Trump administration is undermining moderates in the country, according to The Associated Press.

The U.S. has sent an aircraft carrier to the Persian Gulf region and evacuated non-essential personnel from Iraq amid growing threats the administration says are linked to Iran.

Ahead of briefings on Capitol Hill, Acting Defense Secretary Patrick Shanahan is suggesting that the U.S. military response to Iranian threats has already had an effect.

Shanahan said that the military moves by the United States have given Iran “time to recalculate” and as a result, the potential for attacks on Americans is “on hold.”

He cautioned that the lack of attacks on Americans doesn’t mean the threats have gone away.

The U.S. sent an aircraft carrier strike group, four bomber aircraft and other assets to the region, and is moving a Patriot missile battery to an unnamed country in the area.

Shanahan says the response was a measure of America’s willingness to protect its people and interests in the region. He and other national security officials will brief Congress on Tuesday.

Will Pelosi bother to attend the acting defense secretary’s meeting?

Or, will she simply tune into CNN for her information?