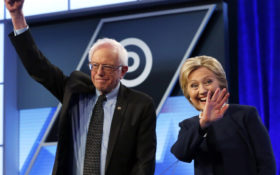 President Donald Trump said earlier this month that ANY major political operative would attend a meeting like the one his son took part in, where he was promised dirt on presidential rival Hillary Clinton.

The left mocked him for it, claiming no one on “their” side would ever dream of doing such a thing.

But once again, Trump was right!

The Senate Judiciary Committee is looking into an attempt at so-called collusion that involved Democrat operatives working on the doomed Clinton campaign who allegedly had help from foreign agents, in this case from Ukraine.

This may have been a violation U.S. law… yet the mainstream media has been so silent that legal experts are stunned by the hypocrisy.

“If everyone is running around with the assumption that it’s illegitimate to work with a foreign government in a campaign, then it’s perfectly fair to ask what was the relationship between the Clinton campaign and the Ukrainians,” Benjamin Wittes, editor of the LawFare blog and no friend of the Trump administration, told PolitiFact.

Rep. Adam Schiff, a Democratic congressman from California who has made a name for himself on the left for his attacks on Trump, tried to downplay it earlier this month… but when pressed, even he was forced to admit that the incident was “problematic.”

Here’s what happened: According to Politico, Ukrainian officials may have been trying to help Clinton’s desperately foundering campaign last year by assisting in efforts to dig up dirt on Trump and the key figures around him.

The website said officials there were “helpful” to Alexandra Chalupa, a Ukrainian-American activist who was a paid consultant by the Democrats at the time.

“Chalupa’s actions appear to show that she was simultaneously working on behalf of a foreign government, Ukraine, and on behalf of the DNC and Clinton campaign, in an effort to influence not only the U.S. voting population but U.S. government officials,” Sen. Chuck Grassely (R-Iowa) wrote Deputy Attorney General Rod Rosenstein, according to Fox News.

He’s calling on Rosenstein to investigate to see if this went beyond ugly and unethical and crossed over into a violation of law, specifically the Foreign Agents Registration Act, The Daily Caller reported.

Of course, everyone involved is denying that anything untoward took place. And Democrats claim this is far different from the alleged collusion between the Trump campaign and Russia.

This ugly collusion may have had far more influence on last year’s campaign that anything alleged to have come from Russia.

“Let’s compare (the Trump meeting) to the DNC sending its people to the Ukrainian embassy to coordinate [opposition] attacks against our candidate,” Sebastian Gorka, a White House deputy assistant, told CNN. “If you want to see collusion, it’s in the DNC. I mean, it is up to their necks.”

Indeed, everyone at the meeting that Donald Trump Jr. fully and voluntarily disclosed has admitted that nothing came of it.

Yet the Ukraine incident may have helped lead to the dirt on Paul Manafort, then Trump’s campaign manager, hitting the U.S. media, including alleged payments by Ukraine’s deposed president Viktor Yanukovych.

And that, in turn, helped force Manafort’s resignation from the Trump campaign last summer.

At the time, Team Hillary celebrated it as another supposed nail in Trump’s coffin, and her cheerleaders in the media joyfully used the resignation to feed a narrative about so-called “chaos” in the Trump campaign.

Of course, it all blew up in their faces. This may have been what ultimately helped Trump to his shocking come-from-behind Election Day victory.

Manafort’s resignation led to the shakeup that brought in both Steve Bannon and Kellyanne Conway, two seasoned political minds who helped the campaign get back to basics.

That renewed focus on the candidate and his core message, more than anything else, may have fueled Trump’s stunning come-from-behind victory in November.