Dem using taxpayer cash for... WHAT!? - The Horn News 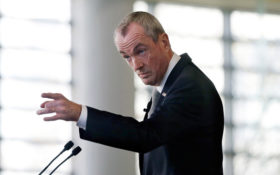 How else can you explain why a newly elected Democrat is pushing through a massive tax hike in order to give millions to illegals?

A budget proposal from New Jersey Governor Phil Murphy, the Democrat who replaced Chris Christie, would spend more money than any budget in the history of the Garden State – and he’s backing huge new programs and benefits for illegals.

Some of the money would go to undermine federal law, in order to spite President Donald Trump.

In a section titled “Ensuring Social Justice,” Murphy wants to spend millions of taxpayer dollars to help illegal immigrants avoid being deported by the Trump administration.

Murphy would shield illegals “against Washington attacks” and fund “non-profit groups providing legal assistance to those facing detention or deportation.”

His Office of Immigrant Defensive Protection would give $2.1 million to Legal Services of New Jersey to keep the “undocumented worker” community in the United States.

Murphy told The Washington Post that he worries some of the “rumors that swirl” about deportations would cause illegal immigrants to “go back into the shadows.”

Murphy seems to be extremely confused about which citizens he got elected to serve.

“DREAMers … are every bit as American as my four kids,” he said last year.

“We will stand up to this president,” he said.

“We will be a sanctuary – not just city – but state. This is America!”

That’s not enough for Murphy, a former director of Goldman Sachs. He also wants to give illegal immigrants free financial aid to go to college.

Illegals already pay in-state tuition, which is denied to U.S. citizens just across the border in New York or Pennsylvania. But once two bills land on Murphy’s desk, foreigners can force U.S. taxpayers to pay for the illegals’ American dream.

The state government estimates that the state’s current 600 non-citizen college students will cost taxpayers $4.47 million – but that number is way too low. The Pew Research Center found that there are 500,000 illegal immigrants in the state of New Jersey.

Once taxpayers are paying the bill, look for the admission applications – and the price tag – to skyrocket.

The liberals aren’t even grateful; they want American citizens to keep underwriting new government programs for people who have no right to be in this country.

The state chapter of the ACLU called in-state tuition “an important first step.” The president of the liberal think tank New Jersey Policy Perspective sloughed off the legal aid as “a welcome start.”

But the sky-high cost is already squeezing the state’s legal citizens.

“The illegal alien population residing in New Jersey is costing the state’s taxpayers nearly $2.1 billion per year for education, medical care and incarceration,” reported the Federation for American Immigration Reform (FAIR). “That annual tax burden amounts to about $800 per New Jersey household headed by a native-born resident.”

Murphy knows exactly how he’s going to pay for all these government giveaways – by soaking the middle class with new taxes.

His budget calls for an enormous $1.5 billion in new or increased taxes – even though the state already has the highest property taxes in the country.

One-third of that tax increase will come from raising the state’s sales tax.

The proceeds will go to help illegal immigrants – but it’s not like New Jersey citizens couldn’t use that money.

The state is facing a $8.7 billion budget deficit when the fiscal year starts this summer – and that’s the small tip of a deadly financial iceberg.

The state owes a total of $184.3 billion in pensions and benefits that it can’t pay in 2017 – and the mountain of red ink is climbing.

Of all the pensions the state owes to its workers, it only has money to pay 31 percent of it.

In other words, if nothing changes, two out of every three state workers counting on a state retirement check won’t get a dime when they retire.

New Jersey’s rusted-out cities are hurting. State funding for its own municipalities has been flat since 2007, although inflation has been 22 percent.

“It sickens me that Phil Murphy wants to be the governor of people who couldn’t legally elect him,” said Jeff Deminski, a state talk show host. “Priorities, governor. How about us first?”

The new Democratic orthodoxy is clear: Americans have to be taxed to the breaking point in order to pay for illegal immigrants.

If you think the government should put Americans first, evidently, you have to vote for another party.