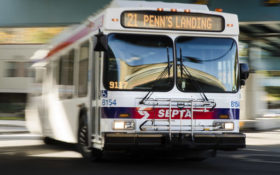 The media has reported for months that a “Blue Wave” could sweep Democrats back in control of the House in November — but leaked audio may have just thwarted all their hard work in one New York district.

A group of liberal activists from New York City were caught hiding their plan to bus up Democratic-Socialists to New York’s 19th Congressional District to help Democratic nominee Antonio Delgado.

Leaked audio has gone viral after Kate Linker, president of Greater NYC for Change, was heard Saturday telling the group of liberal activists to hide that they’re liberals from New York City — and not actually from the district they’re campaigning in.

Listen to the audio here —

Linker could be heard telling the group, “One thing that I wanted to say that is important, if you post on social media, please do not mention that you are from New York City.”

“The reason is, much though they love us, the Faso campaign on September 15th posted that the Delgado campaign was busing in bus loads of New York City democratic socialists, bringing outsiders in to try to sway the campaign. And the [Delgado] campaign is understandably concerned about this,” she added.

Rep. John Faso, who Linker mentioned, is the Republican incumbent Delgado is challenging.

Linker went on to explain that they are shuffling New York City votes north for Delgado is because they “care about their neighbors” in upstate New York. She again emphasized how important is was not to mention to anyone that they are not actually from the district.

Her concerns stem by mid-September when Faso slammed Delgado for “busing Democratic-Socialists up from Manhattan” in an attempt to prop up his “anemic campaign.”

Faso also tweeted on Sept. 15, “Our campaign relies on #NY19 volunteers, whereas @DelgadoforNY19 is bussing Democratic-Socialists up from Manhattan. Speaks volumes. We need a Congressman who fights & makes a difference for #NY19, not NYC interests.”

Our campaign relies on #NY19 volunteers, whereas @DelgadoforNY19 is bussing Democratic-Socialists up from Manhattan. Speaks volumes. We need a Congressman who fights & makes a difference for #NY19, not NYC interests. pic.twitter.com/QVkPSb3Mmy

The Delgado campaign has not returned for requests to comment on this embarrassing incident, and the mainstream media has failed to reported on this story.

Are we surprised? Not at all.

Delgado has a rude awakening coming for him in November if he believes that a few busload of New York City residents will save him.