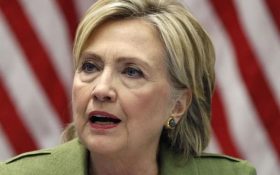 Special Counsel Robert Mueller’s two-year investigation is over and a redacted version of the final report has been released to the public and Congress — and now there’s now a massive spotlight on how big of a role Hillary Clinton’s team had on spreading the Russia collusion lies.

A recently resurfaced email from December of 2015, leaked by WikiLeaks, reveals that Hillary’s team spoke about a plan to “slaughter Donald Trump” by “connecting” him to Russia.

In fact, Hillary’s team laid the foundation for spreading misinformation and lies about alleged Trump-Russia collusion years before Trump secured the Republican nomination and won the election.

In other words, Hillary conspired to simultaneously bring down the president while maintaining the illusion that she only lost the election because of Russian interference.

Mueller’s report clearly stated that he found no evidence of collusion between President Donald Trump and Russia during the 2016 election.

Attorney General William Barr also announced earlier this month that the Department of Justice would not be charging the president with obstruction of justice or any other crimes.

So where did the lies start? The entire so-called “witch hunt” and false rumors of collusion began with Hillary’s team.

In the email from Brent Budowsky to John Podesta, who served as Hillary’s 2016 campaign manager, they came up with a plan to link Trump to Russia. It also included an idea on how to downplay Hillary’s role in the rise of the Islamic State terrorist group when she served as secretary of state.

After some back and forth, Brent wrote to Podesta: “Best approach is to slaughter Donald for his bromance with Putin, but not go too far betting on Putin re Syria.”

But this wasn’t the only action Hillary and her team took to push the Russian collusion narrative.

As the 2016 presidential election was ramping up, Hillary and the Democratic National Committee paid Fusion GPS roughly $9 million to fund the now infamous (and debunked) dossier by former British spy Christopher Steele.

As detailed by The New York Post, Hillary used her connections to elevate the dossier to the highest levels of the Obama administration.

The FBI, which was led at the time by James Comey, used the dossier as an excuse to wiretap the Trump presidential campaign.

This triggered the two-year, $35 million Russian meddling probe from Mueller — which only resulted in the president being vindicated.

And it all started with Hillary Clinton’s team.