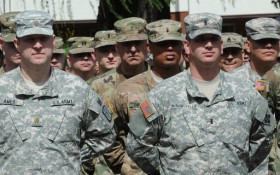 Americans owe the military more than we could ever repay.

America’s two million soldiers and reservists risk life and limb to keep this nation safe, week in and week out, 365 days a year.

The least our country’s fighting men and women deserve is the right to vote. After all, who could be more qualified to choose our next commander-in-chief?

Now, a team of President Barack Obama and former secretary of state Hillary Clinton campaign cronies want to squash their votes – out of sour grapes for Donald Trump’s election!

The Center for American Progress released the report this Monday saying we have to make it harder for the military to vote in order to “protect future elections from interference by hostile nations such as Russia.”

The report, “Election Security in All 50 States,” wants to abolish a method of voting that many deployed soldiers rely on.

They claim that shadowy KGB agents will hack electronic votes – which, coincidentally, is how some U.S. soldiers vote from battle zones.

Instead CAP, which is funded by Clinton pal George Soros, recommends that “all voted ballots be returned by mail or delivered in person.”

That report is nothing but a blatant attempt to strip the military of the right to vote – a right that they protect for us.

Men in uniform who are serving overseas can’t just drop by their local town hall and deliver their cleanly marked ballots.

In fact, the local election board can be their greatest obstacle – especially if it’s located in a Democrat-controlled city.

Military paper ballots are supposed to be mailed 45 days before the election, to make sure the troops have plenty of time to fill them out, and get them postmarked before the mailing deadline.

Even in the best of circumstances, thousands don’t get counted.

But 40,000 ballots were mailed after the legal deadline in 2010. And the worst delay was in New York City and Illinois – the hometowns of Hillary and Obama.

Mailing a paper ballot isn’t even an option for some of our brave soldiers.

The Democrats “don’t believe someone who works on a submarine should be allowed to vote,” said Colorado’s Republican secretary of state, Wayne Williams. There’s no postal service underwater, CAP!

Voter fraud expert J. Christian Adams called the Democrats on their bald-faced hypocrisy. “CAP wants to make it easier for felons and criminals to vote, but wants to make it harder for fighting men and women overseas,” he said.

It’s no mystery why: The military votes overwhelmingly Republican in every single election.

In 2016, the military picked Trump over Hillary at least two-to-one.

Only 25 percent of soldiers would even think about casting a ballot for Hillary, according to the Military Times poll.

Almost as many voters said they would abstain from voting!

For one-in-five U.S. soldiers, would rather not vote at all than help Hillary get into the Oval Office.

The Democrats’ partisan motive couldn’t be any clearer. CAP was founded by none other than John Podesta.

Podesta was chief of staff for President Bill Clinton and chairman of Hillary’s 2016 presidential campaign.

His embarrassing e-mails were hacked and released by WikiLeaks in the waning days of the 2016 election. That move helped cost Hillary a rigged election that everybody thought she had in the bag.

Now he wants to make sure the military never has the chance to cost him another election, and a return trip to the White House.