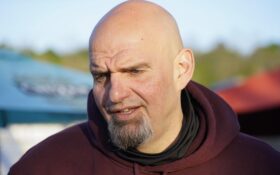 In his campaign for a crucial U.S. Senate seat, Democrat John Fetterman takes credit for reinventing Pennsylvania’s lieutenant governor’s office, transforming it from a political pit stop into a “bully pulpit” from which he’s advanced progressive causes.

Records from Fetterman’s four years in office, however, offer a different portrait of his time in the $179,000-a-year elected job — and their release has sent the Democratic campaign scrambling.

The records show Fetterman typically kept a nearly empty work schedule and was often absent from state business, including presiding over the state Senate, which is one of his chief duties, according to an Associated Press review of his daily calendars and attendance records.

The review found that Fetterman’s daily schedule was completely blank during roughly one-third of workdays from January 2019, when he first took office, to May of this year, when he suffered a serious and near fatal stroke.

Even on days where his schedule showed he was active, a typical work day for Fetterman lasted between four and five hours, the records show.

The findings, which focus entirely on his tenure before his stroke, are notable because Fetterman points to his time as lieutenant governor as a leading credential in his Senate campaign. And as his bid for a seat that could swing the Senate majority becomes more competitive, some Democrats privately worry that Fetterman is proving a lackluster candidate and losing ground in the campaign.

Fetterman’s campaign didn’t explain the gaps in his schedule. In a statement, his spokesman, Joe Calvello, said that “this report is a misleading and inaccurate reflection of John’s actual schedule that totally fails to capture the breadth of his official work and his accomplishments.”

Fetterman didn’t respond to interview requests, but he said in a statement that he’s “shown I can have an impact beyond the prescribed power of a given office.”

“As lieutenant governor,” he said, “my record of showing up and shaking up this office has transformed the Board of Pardons, saved Pennsylvania millions in taxpayer dollars, and grown support in our state for defending LGBTQIA+ rights, weed legalization, union workers, and raising the minimum wage.”

The job of lieutenant governor is typically a stopover for politicians seeking higher office and often comes with limited duties. In Pennsylvania, the primary legal responsibilities for a lieutenant governor are presiding over Senate sessions, chairing the Board of Pardons and heading up the governor’s emergency management committee.

There’s no suggestion that Fetterman’s absences prevented the state from conducting important business, and his formal calendars may not capture the full range of his activities.

Fetterman’s defenders say the pandemic sapped opportunities for him to take a more active role and note that Wolf did not call on him to take on a bigger workload.

“I believe he … would have to liked to,” state Senate Minority Leader Jay Costa, D-Allegheny, said of Fetterman. “Every time (Wolf) called on John to communicate, he did.”

In a statement, Wolf said Fetterman’s office has “limited responsibilities” but called him “a dedicated public servant who has supported my priorities over the past four years.”

Fetterman’s daily schedules offer a window into his time in office, detailing his obligations including meetings, phone calls, hearings and even drive time to events around the state.

In 2019, Fetterman’s first year in office, he regularly attended ribbon cuttings and conducted a statewide listening tour focused on legalizing marijuana. Still, on 47 different work days he had nothing on his schedules.

His workload plummeted after the coronavirus pandemic hit, the schedules show.

For months, starting in March 2020, his work days often consisted of a morning meeting focused on the pandemic that typically lasted 45 minutes, sometimes followed by interviews with local and national journalists. Occasionally he would attend virtual events.

But Fetterman also did not take an active role and seldom participated in the daily Cabinet meetings, even though he was tapped to head a task force on disparities in the COVID-19 response. It produced a 32-page report.

In some cases, he booked national media interviews during times he otherwise had state business to attend to, including presiding over the Senate, or pandemic work group meetings.

During a one-month period beginning in October 2020, the vast majority of events listed on Fetterman’s calendar were interviews with national or Washington-based news outlets, with a scattering of official duties and events mixed in, the records show.

In 2021, Fetterman’s calendars showed 115 work days with no activities or events listed. That includes a period that stretched from the end of June to mid-September where Fetterman’s schedules were largely blank, listing a total of about 11 hours worked during that period.

In the first half of 2022, lasting up to his stroke, there are nearly 70 days with nothing on listed on his schedule.

Fetterman’s work ethic has been a persistent focus of attack in the Senate campaign by Republicans who characterize the 53-year-old as a trust fund beneficiary who never had a paying job until he was elected lieutenant governor. Fetterman’s father was a partner in an insurance firm.

Asked on a radio program Wednesday to respond to the claim that he’d “never worked a day in your life,” Fetterman said it wasn’t true.

For 13 years he was the mayor of Braddock, a tiny, struggling steel town of 2,000 residents outside Pittsburgh.

He called being mayor “a full-time job, fighting to bring (back) a community that was abandoned, left behind.” Fetterman has also told of working for an insurance firm in Connecticut in the 1990s. He also held a job helping young people get GED certificates.

Still, Fetterman’s 2015 financial disclosure when he first ran for U.S. Senate showed that he was paid just $1,800 a year to be Braddock’s mayor and lived off $54,000 given to him by his parents that year alone. Property records show that he bought his home in Braddock from his sister for $1.

That has fueled a 25-second digital ad from the campaign of Republican nominee Mehmet Oz that touts the legend “Freeloading Fetterman” over the vague image of a man in a black hoodie — Fetterman wears hoodies just about everywhere he goes. The narrator finishes, “Thank goodness for daddy’s deep pockets.”

It’s a line of criticism first used by Fetterman’s Democratic rivals in past campaigns, whispering that he blew off city council meetings rather than face critics while serving as mayor of Braddock.

Records show that Fetterman skipped at least 53 city council meetings during his 13 years as the town’s mayor, or roughly one-third of the meetings held during his tenure.

It’s a trend that extends to his duties presiding over the Pennsylvania state Senate.

In 2020, Fetterman did not preside during 27 of the 53 Senate sessions that year, according to Senate journals, a period when the chamber adapted to the pandemic by letting numerous members connect to sessions through video links.

Fetterman did not show up for one-third of the Senate’s 59 session days in 2021. This year, he was present for 15 of 16 session days before suffering a stroke in May.

He came back to preside over the Senate’s session on Sept. 21 — then skipped the next two days of Senate sessions as he returned to the campaign trail.

Fetterman’s campaign attributes 20 of his absences in 2020 to COVID-19 restrictions — although that did not stop a number of senators from attending sessions in person. It also attributed 10 absences to conflicts with Board of Pardons meetings or other official business.