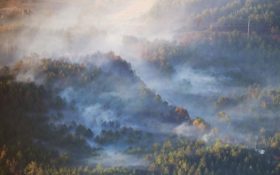 Authorities say a family of five was killed in an explosion at their vacation property on Washington state’s Hood Canal.

Brinnon Fire Chief Tim Manly said Monday that two adults and their three young children died in the fire early Sunday. He says the family from Washington state spends weekends at the cabin in Brinnon, a small community on the Olympic peninsula.

Manly did not release names or ages, pending notification of relatives.

Sponsored: I couldn’t believe what was living inside my body…

The Washington State Patrol and the Bureau of Alcohol, Tobacco, Firearms and Explosives are assisting the Jefferson County Sheriff’s Office.