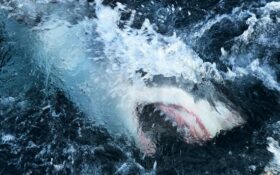 Officials are warning people to stay out of the water after sharks were seen eating the carcass of a whale that has washed ashore on an Oahu beach.

Several tiger sharks were seen eating the whale remains as it drifted closer to shore in Waimanalo, Hawaii News Now reported Tuesday. The carcass landed on the beach later in the day, but warning signs remained Wednesday.

Honolulu Ocean Safety Division Lt. David Loui took a jet ski out to the carcass as sharks ate chunks of the whale.

“One of the sharks, probably about 12 feet, was actively coming to the jet ski craft and almost making lunges toward it, and basically trying to scare us off,” Loui said.

People came to the beach to see the rare sight.

“We’ve just been hanging out, kind of watching it, looking at what it looks like, looking at the tiger bites on it,” said Sammy Falgiani of Honolulu.

Only about 20 dead whales and dolphins wash ashore on U.S. soil around the Pacific each year, said Nicholas Hofmann, training coordinator of the Health and Stranding LAB at University of Hawaii.