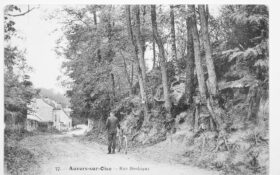 The exact location where Dutch master Vincent van Gogh painted his last work has been pinpointed after being hidden in plain view for years among a tangle of roots next to a rural lane near Paris. Experts say the discovery sheds new light on the anguished painter’s mental state on the day he is widely believed to have fatally shot himself.

A Dutch researcher realized that the scene depicted in the troubled artist’s final work, “Tree Roots,” was visible on a faded picture postcard featuring a man standing next to a bicycle on a back street of the village of Auvers-sur-Oise, 35 kilometers (21 miles) north of Paris. Van Gogh spent the last weeks of his life in the village and completed dozens of paintings there. Helpfully, the card even included the name of the street.

The discovery by Wouter van der Veen, scientific director of the Van Gogh Institute in France, provides a new glimpse of the artist in his final hours. It means art historians can now see that Van Gogh worked on the painting until the end of the afternoon, meaning he spent much of the day concentrating on the canvas.

“There has been a lot of speculation about his state of mind, but one thing that is very clear is that he spent quite a bit longer working on this painting right through the afternoon. We know that from the light fall in the work,” Emilie Gordenker, director of the Van Gogh Museum in Amsterdam, told The Associated Press in a telephone interview Wednesday. “So, you know, he really was at work right up to to the end.”

The painting, which is not considered to have been completed by Van Gogh, hangs in the Amsterdam museum. Gordenker said its composition and execution — a tight focus on gnarled roots on a hillside — have led to it being seen as a “harbinger of abstraction.”

Van Gogh never got to further develop the painting style.

According to the museum’s version of Van Gogh’s life, after working on “Tree Roots” the artist walked into a nearby field of wheat later in the day and shot himself in the chest with a pistol. He died two days later, on July 29, 1890, aged 37. Two American authors cast doubt on the theory in 2011, suggesting the artist was shot by two teenage boys.

Van der Veen believes the museum’s version of events and agrees his new discovery shows that Van Gogh had his wits about him and was methodical in his thinking before he pulled the trigger to kill himself.

“So the final steps were also something he carefully thought about,” he said. “So it was a lucid decision. It was not a fit of madness.”

The new discovery was made, in part, thanks to the coronavirus pandemic.

While stuck at home during France’s two-month lockdown, Van der Veen used the extra time to organize his numerous files and documents on Van Gogh, including digitizing images such as the old postcard from Auvers-sur-Oise.

One day in late April, during a phone conversation, he saw the card on his computer screen and it suddenly struck him that he was looking at the location of “Tree Roots.” Next to the man and his bicycle, roots and trees are clearly visible.

He wasn’t able to visit the site for several weeks, but had a friend in the village visit and also took a virtual trip down the lane using Google’s Street View.

Villagers know the spot and the main tree root well, even giving it the name “the elephant” because of its shape, Van der Veen said.

”It was really hiding in plain sight and it was even a little bit disguised as it had taken another identity,” he added.

The researcher says that while his discovery has given art historians more to mull about Van Gogh’s last working day, it also provides tourists with an extra reason to visit Auvers-sur-Oise. The French village already draws tens of thousands of visitors each year because of its links to Van Gogh, who spent his final weeks there and is buried in the village’s cemetery alongside his brother, Theo.

“They travel a lot just for one reason — to walk in the footsteps of Vincent van Gogh — and now they can stand at the very place where he painted his last painting,” Van der Veen said. “And that’s a very moving thing for a lot of people. So I’m very happy to be to be able to share that with all those who love Van Gogh.”