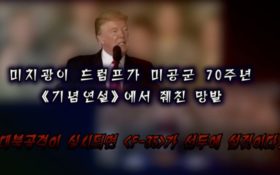 Military analysts say North Korea doesn’t have either the capability or the intent to attack U.S. bombers and fighter jets, despite the country’s top diplomat saying it has every right do so.

They view the remark by North Korean Foreign Minister Ri Yong Ho and a recent propaganda video simulating such an attack as tit-for-tat responses to fiery rhetoric by U.S. President Donald Trump and his hardening stance against the North’s nuclear weapons program.

By highlighting the possibility of a potential military clash on the Korean Peninsula, North Korea may be trying to create a distraction as it works behind the scenes to advance its nuclear weapons development, said Du Hyeogn Cha, a visiting scholar at Seoul’s Asan Institute for Policy Studies. Another possibility is that North Korea is trying to win space to save face as it contemplates whether to de-escalate its standoff with Washington, he said Tuesday.

Speaking to reporters before leaving a U.N. meeting in New York, Ri said Trump had “declared war” on his country by tweeting that North Korean leader Kim Jong Un “won’t be around much longer.” Ri said North Korea has “every right” to take countermeasures, including shooting down U.S. strategic bombers, even when they’re not in North Korean airspace.

The U.S. frequently sends advanced warplanes to the Korean Peninsula for patrols or drills during times of animosity. Last weekend, U.S. bombers and fighter escorts flew in international airspace east of North Korea to the farthest point north of the border between North and South Korea that they have in this century, according to the Pentagon.

Hours after the flights Sunday, a North Korean government propaganda website posted a video portraying U.S. warplanes and an aircraft carrier being destroyed by attacks. The video on DPRK Today, which was patched together from photos and crude computer-generated animation, also included footage of North Korean solid-fuel missiles being fired from land mobile launchers and a submarine. The North was clearly trying to claim it has the ability to conduct retaliatory strikes against U.S. attacks, said Hong Min, an analyst at Seoul’s Korea Institute for National Unification.

It’s also unclear whether North Korea would be able to even see the advanced U.S. warplanes when they come. South Korea’s National Intelligence Service told lawmakers in a closed-door briefing on Tuesday that the North’s inadequate radar systems failed to detect the B-1B bombers as they flew east of North Korea.

The last time North Korea fired on a U.S. aircraft was in 1994 when it shot down a U.S. Army helicopter around the heavily armed inter-Korean border, killing one of the pilots and capturing the other. The surviving pilot said after his release he was pressured by North Korean officials to confess that the helicopter had crossed into North Korea. In 1969, a North Korean fighter jet shot down an unarmed U.S. reconnaissance plane and killed all 31 crewmembers on board.

It’s highly unlikely North Korea would attempt a similar attack now, experts say. Amid tension created by the North’s nuclear weapons tests and threat to detonate a thermonuclear missile over the Pacific Ocean, such an attack would pretty much guarantee retaliation from the United States that could lead to war, Cha said.

“The most obvious reason Ri made those comments was because North Korea simply can’t tolerate such high-profile insults to its supreme leadership,” Cha said. It’s also possible that the North is trying to fan concerns about a potential military clash in the region now so that it can win room to save face later when it tries to de-escalate, he said.

“If Kim Jong Un ever offers a moratorium on his missile tests or makes whatever other compromise, he could say he made a big-picture decision to reduce military tension in the Korean Peninsula,” Cha said. He said Ri’s comments also allow China and Russian to restate their calls for a “dual suspension” of North Korean weapons tests and displays of military capability by the U.S. and South Korea.

The Trump administration’s stance on North Korea has been hardening in recent months as the North has been stepping up the aggressiveness of its nuclear and missile tests. It conducted its sixth and most powerful nuclear test on Sept. 3, which it said was a thermonuclear weapon built for intercontinental ballistic missiles. It tested two ICBMs in July, displaying their potential ability to reach deep into the continental United States. North Korea has also fired two powerful midrange missiles over Japan in recent weeks.

Trump in a speech at the United Nations General Assembly last week said the United States would “totally destroy” North Korea if provoked, which prompted Kim to pledge to take the “highest-level” action against the United States. Ri then said North Korea might conduct the “most powerful” atmospheric hydrogen bomb test in the Pacific Ocean, but added that no one knew what Kim would decide.