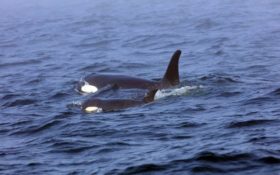 A team of whale experts has injected an ailing killer whale with antibiotics in a rare effort to save her.

A veterinarian examined the orca. Experts gave her antibiotics through a dart and took a breath sample to help assess whether she has an infection.

NOAA says that the team will decide whether to feed the free-swimming whale live salmon from a boat. The whale could then be given live salmon dosed with medication.

The orca is thin and in poor body condition.

Another orca in the critically endangered group of killer whales has pushed her dead calf for more than two weeks, raising concerns about her health.