Expect "Roseanne" to cool it on the politics, ABC says - The Horn News 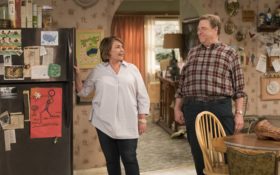 Expect “Roseanne” to cool it on politics and concentrate on family stories when it returns for the second season of its revival next year.

That was the word Tuesday from ABC Entertainment chief Channing Dungey as she introduced the network’s plans for next year. The show’s return exceeded all expectations this spring, with the support of Roseanne Barr’s character for President Donald Trump attracting attention.

Dungey noted that as the first season went on, the focus shifted from politics to family.

“I think they’re going to continue on the path that they were on toward the latter part of this season, which is away from politics and more focused on family,” she said.

There may be good business and creative reasons for that. Asked if she was concerned that Barr’s opinions might affect how viewers perceive the show’s content, Dungey replied, “I do think there is a little bit of that, yes.”

Last year, ABC’s cancellation of Tim Allen’s “Last Man Standing,” another comedy with a conservative-leaning star, provoked social-media protests. Channing said Tuesday that the decision was solely based on ABC’s inability to come to contract terms with their studio partner — and she wished the show well in its new home at Fox, which picked it up for next season.