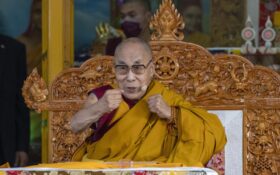 Thousands of people lined both sides of the road outside the airport in the cold desert region’s Leh town to welcome the Dalai Lama, who is touring outside his base in the northern Indian city of Dharmsala for the first time since the outbreak of the coronavirus pandemic in 2020. He will stay in Ladakh for about 45 days.

The Dalai Lama has made Dharmsala his headquarters since fleeing from Tibet after a failed uprising against Chinese rule in 1959. India considers Tibet to be part of China, though it hosts Tibetan exiles.

The visit is also his first since India split the high-altitude region from Kashmir and took direct control of it in 2019. A year after that change, Indian and Chinese troops came close to war in Ladakh and ever since they have been locked in a military standoff along their disputed border.

India’s Foreign Ministry hit back and said: “It has been a consistent policy of our government to treat him as a guest in India and as a respected religious leader who enjoys a large following in India.”

Before his last visit in 2018, the Dalai Lama would frequently travel to Ladakh and deliver religious sermons in the region, which is famous for its Buddhist monks in mountaintop monasteries, sparsely populated and stunning landscapes and elusive snow leopards prowling rugged terrain.

China doesn’t recognize the Tibetan government-in-exile and hasn’t held any dialogue with the representatives of the Dalai Lama since 2010.

China says Tibet has historically been part of its territory since the mid-13th century, and the Communist Party has governed the Himalayan region since 1951. But many Tibetans say they were effectively independent for most of their history, and that the Chinese government wants to exploit their resource-rich region while crushing their cultural identity.

The Dalai Lama denies being a separatist and says he only advocates substantial autonomy and protection of Tibet’s native Buddhist culture.