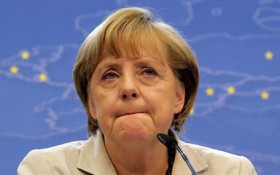 Chancellor Angela Merkel’s government plane has been grounded by an excited fan who jumped out of her van to take a photo of it at Dortmund airport but forgot to put the parking brake on, and the vehicle rolled slowly into the nose of the jet.

Germany’s Spiegel Online posted a picture Tuesday of the low-speed collision with the Global 5000 jet and reported that the van driver was an employee of the airport.

The German air force confirmed in a tweet that Merkel returned to Berlin by helicopter Monday after her plane was damaged by a vehicle, but didn’t provide further details.

The accident is a headache the air force doesn’t need, after a string of highly publicized breakdowns of the aging government fleet causing delays for Merkel and others.