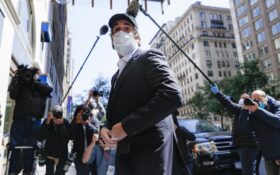 President Donald Trump’s former personal lawyer and fixer, Michael Cohen, was released from federal prison Thursday to serve the remainder of his sentence at home because of the coronavirus pandemic.

Wearing a surgical mask and a baseball cap, Cohen arrived at his Manhattan apartment building at around 10:40 a.m. after his release from FCI Otisville in New York.

He removed boxes of legal documents from the trunk of a car. A uniformed doorman at the luxury residence, not far from Trump Tower, carried them into the lobby on a luggage cart.

Cohen, who pleaded guilty to tax charges, campaign finance fraud and lying to Congress, didn’t stop to speak with reporters gathered on the sidewalk.

“I am so glad to be home and back with my family,” Cohen wrote on Twitter a little more than an hour after arriving home. “There is so much I want to say and intend to say. But now is not the right time. Soon. Thank you to all my friends and supporters.”

Cohen, 53, was released on furlough as part of an attempt to slow the spread of the virus in federal prisons. He began serving his sentence last May and had been scheduled to remain in prison until November 2021.

Prison advocates and congressional leaders have been pressing the Justice Department for weeks to release at-risk inmates, arguing that the public health guidance to stay 6 feet (1.8 meters) away from other people is nearly impossible behind bars.

Attorney General William Barr ordered the Bureau of Prisons to increase the use of home confinement and expedite the release of eligible high-risk inmates, beginning at three prisons identified as coronavirus hot spots. Otisville is not one of those facilities.

A federal judge had denied Cohen’s attempt for an early release to home confinement after serving 10 months in prison and said in a ruling earlier this month that it “appears to be just another effort to inject himself into the news cycle.” But the Bureau of Prisons can move prisoners to home confinement without a judicial order.

The Bureau of Prisons said last week that more than 2,400 inmates had been moved to home confinement since Barr first issued his memo on home confinement in late March, and 1,200 others had been approved and were expected to be released in the coming weeks.

Former New York state Senate leader Dean Skelos, 72, who was also serving a sentence at Otisville, was released on home confinement after testing positive for the coronavirus.