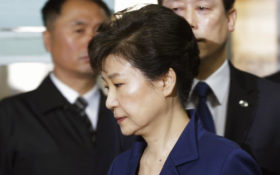 South Korean prosecutors on Monday indicted ex-President Park Geun-hye on bribery, extortion, abuse of power and other high-profile corruption charges that could potentially send her to jail for life.

It is the latest in a series of humiliations for Park, who was driven from office by massive and peaceful popular protests. Park was impeached in December, officially stripped of power in March and has been in a detention facility near Seoul since being arrested last month on allegations that she extorted from businesses, took bribes and committed other wrongdoing, all in collaboration with a longtime confidante.

Prosecutors also indicted Shin Dong-bin, the chairman of Lotte, South Korea’s fifth-largest business conglomerate, on a charge of offering a bribe of 7 billion won ($6 million) to Park and her friend Choi Soon-sil in exchange for a lucrative government license to open a new duty free shop.

Park will remain jailed and be escorted from the detention center to a Seoul court for a trial that is to start in coming weeks and could take as long as six months. It is still unclear if the trial will start before a May 9 special election that will determine her successor.

Park, 65, was elected South Korea’s first female president in late 2012. The country will now watch as she is forced to stand in court while handcuffed, bound with rope and possibly dressed in prison garb.

If convicted, her bribery charge carries the biggest punishment, ranging from 10 years in prison to life imprisonment.

While deeply unpopular among many South Koreans, Park still has supporters, and some conservative politicians and media outlets are already demanding that authorities pardon her if she’s convicted.

Some of her supporters still stage protests in downtown Seoul every weekend. Such rallies could pressure whoever becomes her successor at a time when South Korea also faces increasing North Korean nuclear threats and diverse economic woes.

South Korea pardoned two convicted former leaders in the late 1990s in a bid for national reconciliation amid financial crisis, and its court had until recently showed leniency toward jailing many corrupt business tycoons because of worries about hurting the economy.

Park’s scandal triggered huge political turmoil in South Korea, with millions taking to the streets to call for her ouster for months before her supporters launched their own protests. Dozens of high-level figures, including Choi, Park’s friend of 40 years, top administration officials and Samsung heir Lee Jae-yong have already been indicted and await separate criminal trials.

Prosecutors charged Park with conspiring with Choi and a presidential adviser to pressure 18 business groups to donate a total of 77.4 billion won ($68 million) for the launch of two non-profit foundations controlled by Choi.

Park and Choi were also charged with taking bribes from two of the business groups, Samsung and Lotte, and colluding with other top officials to blacklist artists critical of Park’s government to deny them state support. Park also faces charges that she passed on dozens of documents with sensitive information to Choi via one of her presidential aides.

According to prosecutors, Park and Choi allegedly took about 30 billion won ($26 million) in bribes from Samsung in return for a government support for a smooth company leadership transition.

Park has denied any legal wrongdoing, arguing that she only got help from Choi to edit some presidential speeches and on public relations.

Park is the daughter of late dictator Park Chung-hee, one of the most divisive figures in South Korean history. Some recall him as an enormous human rights abuser while others credit him for spearheading a rapid economic rise in the 1960-70s. Critics say Park’s 2012 election wouldn’t have happened without conservatives’ nostalgia for her father.

Park Chung-hee’s iron-fisted 18-year rule ended after he was gunned down by his spy chief in 1979, five years after his wife was killed during an assassination attempt that originally targeted her husband.

Park Geun-hye once described Choi, 60, as someone who helped her when she had difficulties in the past, an apparent reference to her parents’ deaths.