Ex-NFL star SHOCKS 60 Democrats with one statement... - The Horn News 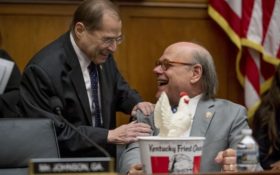 One of the original members of the silver and black had a shocking message for liberals last week: If you want slavery reparations, it’s the Democrats that must pay.

The longtime safety was feared on the field for his interception prowess. But Wednesday, it was his words putting a bruising on Democrats.

Burgess claimed he agreed in favor of reparations.

“The history of our black country, black America, has been stolen from us for decades,” Owens said.

But the ex-NFL star stunned liberals, saying that Democrats are the ones who should be forced to pay restitutions to descendants of slaves.

“I do believe in restitution. Let’s point to the party that was part of slavery, KKK, Jim Crow, that has killed over 40 percent of our black babies, 20 million of them,” he said.

It’s safe to say, Democrats did not find this amusing. But neither did Owens.

“State of California,” Owens said. “75 percent of our black boys can’t pass a standard reading and writing test. A Democratic state. So yes, let’s pay restitution. How about a Democratic Party pay for all the misery brought to my race and those — after we learn our history — who decide to stay there, they should pay also.”

Owens looked around the House floor and urged everyone to realize that “this country has given us greatness.”

Why is it that the Democrats are the only ones running from the truth?

You can watch the entire testimony below: