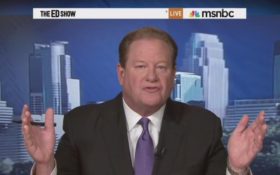 It’s the “unspoken truth” of the mainstream media… one you’ve long suspected, but no one has had the nerve to admit publicly.

Now, a prominent member of the liberal elite is coming clean.

A liberal talk-show host has finally spoken up and exposed the ugly truth about the 2016 election: The media tried to rig it for Hillary Clinton.

Former NBC News star Ed Schultz told Jamie Weinstein of the National Review he was given strong signals that the network was backing Hillary for president.

Schultz claims he was shunned over his support for Sanders, the socialist candidate who ultimately lost the Democratic nomination to Clinton amid allegations of a rigged primary process.

“I think the Clintons were connected to [NBC News chairman] Andy Lack, connected at the hip,” Schultz said. “I think that they didn’t want anybody in their prime time or anywhere in their lineup supporting Bernie Sanders.”

The fallen host claims the network tried to stop him from covering Sanders’ 2015 speech launching his dark-horse campaign for the nomination even though he also had a pre-taped interview with Sanders ready to go for the event.

Eventually, he did cover the speech live – but Schultz implied that may have been what led to his ouster at the liberal network.

“I think that they were in the tank for Hillary Clinton, and I think that it was managed,” he said. “And 45 days later, I was out at MSNBC.”

His show was scratched along with several others as the flailing cable channel attempted yet another makeover.

Schultz is now at RT, aka Russia Today, Moscow’s government-funded propaganda network that is essentially controlled by dictator Vladimir Putin.

But Schultz seems to believe it’s light years better than the daily humiliation of working for that “other” propaganda network, MSNBC.

What’s more, he insisted that the network’s Moscow bosses give him “the most freedom I’ve ever had” and more independence than he ever received at his previous gig.

“There was more oversight and more direction given to me on content at MSNBC than there ever has been here at RT,” he said. “I think that it’s very sad that story is not getting out.”

On the flipside, it’s safe bet he’s not doing “real journalism” when it comes to covering Putin’s thuggery.

In fact, when pressed during the interview with the National Review, he specifically refused to criticize Putin and said his previous coverage of him “might have been overboard.”

“Does he have a nasty human rights record?” he asked.

“I think the United States has a nasty human rights record,” Schultz replied. “I do think that every super power on the globe has a very poor record on human rights.”

While MSNBC might not be a paragon of independence, they certainly got the last word in on this one.

When asked about Schultz’s comments by The Independent Journal Review, a spokesperson said: “What is the Russian word for bananas?”