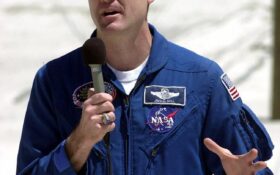 James Halsell Jr., 64, of Huntsville, pleaded guilty to two manslaughter and two assault charges during a hearing in which relatives of the victims wore shirts emblazoned with images of 11-year-old Niomi Deona James and 13-year-old Jayla Latrick Parler, killed when a car driven by Halsell slammed into one driven by their father in rural Tuscaloosa County.

While Halsell could have received 20 years for each manslaughter charge and 10 years for each assault charge, a judge agreed to probation and ordered him to spend four years in prison without early release followed by 10 years on supervised release. Halsell could be sent back to prison for 16 years if he violates probation after his release, said District Attorney Hays Webb, who opposed the lighter treatment.

The former astronaut, who went to work in the aerospace industry after leaving NASA in 2006, apologized in court and was taken into custody immediately the hearing. Outside court, the girls’ mother, Latrice Parler, said relatives weren’t pleased with the outcome.

“It wasn’t justice,” said Parler, who told the judge about the last time she saw the children and recounted the anguish of losing them.

“My daughters were amazing, beautiful, smart, strong little girls that could have been anything in this world if they had the opportunity to grow up, but that was taken from me and all of everyone else in this world,” Parler said. Halsell’s apology didn’t seem sincere, she said.

Webb said there were “no winners” in the case.

“It serves as a reminder that there’s a very fine line. You have someone who has been to space five times and, because of a bad decision on his part, wound up killing two girls,” Webb told The Associated Press in an interview afterward.

Authorities alleged Halsell was under the influence of drugs or alcohol in June 2016, when he drove a rental car into the rear end of one carrying the girls on a remote highway. Halsell had been driving to Louisiana to pick up his son and wound up on a road he mistook for Interstate 20/59, authorities said.

The girls’ father, Pernell James, and a woman were injured but recovered. James said Halsell should have received the maximum punishment but was instead given time to get his family and affairs in order before pleading guilty.

The case was delayed for reasons including the complexity of the evidence, the death of a defense lawyer’s father, a possible plea that fell through in 2019 and the pandemic, said Webb, but Halsell’s status as a former astronaut had “zero influence in any fashion” on the outcome.