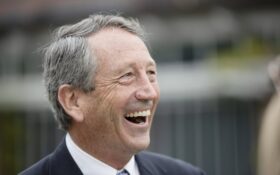 Mark Sanford, the former South Carolina governor, congressman and one-time presidential candidate, is going to work for a lobbying firm.

Shumaker Advisors announced Tuesday that Sanford would be joining the firm as an executive vice president and principal. The government relations arm of a law firm founded in 1925, Shumaker Advisors operates seven offices in Ohio, Florida, Michigan and the Carolinas, according to its website.

“Mark’s knowledge of policymaking at both the state and federal level is unmatched. He has a command of the issues, the process, and the politics, and our clients will be well served by his leadership,” said Shumaker Advisors Florida executive vice president David Jolly, a former congressman whose time in the House overlapped with Sanford’s second congressional career.

It wasn’t immediately clear if Sanford, technically an advisor at the firm, would register as a lobbyist.

“I have been honored to serve the citizens of South Carolina and of the United States and look forward to this new chapter,” Sanford said. “I’ve always tried not only to make government smaller, but to well understand its details, and in this light I look forward to joining the team of outstanding professionals at Shumaker.”

Sanford, 60, has been working to find a foothold since end of the most recent iteration of his political career. Winning three terms in the U.S. House in the 1990s, Sanford then was elected twice as governor before an extramarital affair marred the end of his second term.

But Sanford’s secret 2009 rendezvous to Argentina to visit his mistress while his in-the-dark gubernatorial staff told reporters he was hiking the Appalachian Trail, however, did not end his ability to win elections. After a brief hiatus and a divorce, he returned to politics, winning a special election to his old U.S. House seat in 2013 and holding on twice more before his criticism of Donald Trump Trump led to a 2018 primary loss.

The next year, Sanford mounted a short-lived challenge to Trump himself, centering what he characterized as a “long shot” effort around warnings about the national debt. Some, including Sanford’s former gubernatorial staffers, initially questioned whether the effort was a serious one, positing that it might be an effort to stay relevant after the 2018 defeat.

Sanford’s home state would ultimately opt not to hold a 2020 GOP presidential primary, clearing the way for Trump’s nomination in South Carolina.

Sanford ultimately dropped his presidential pursuit on the eve of televised hearings in the U.S. House for Trump’s first impeachment trial, saying the issue had made it difficult for his campaign to gain traction.

“You’ve got to be a realist,” Sanford said in November 2019 outside the New Hampshire statehouse. “What I did not anticipate is an impeachment.”

In his new role with Shumaker, Sanford will be based in Charleston, according to information obtained by The Associated Press.

“I think it’s a great platform to apply the 25 years of ‘school of hard knocks’ in the world of politics, and I look forward to it,” Sanford said.