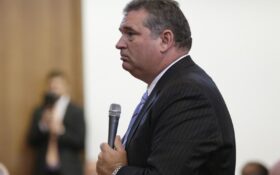 A longtime North Carolina state lawmaker should not receive active prison time for his guilty plea to charges involving his scheme to siphon campaign dollars to his ailing family farm, attorneys recommended to a federal judge this week.

Federal prosecutors asked U.S. District Judge Max Cogburn to sentence former state Rep. David Lewis to probation when the Harnett County Republican learns his punishment next week in a Charlotte courtroom. Lewis’ defense attorneys made a request Wednesday for a sentence similar to probation, saying his wrongdoing was “an act of desperation rather than greed.”

The U.S. attorney’s office in Charlotte already said last summer that it would not seek active time when Lewis’ plea agreement was disclosed. He pleaded guilty in August to making false statements to a bank — a felony — and for failing to file a 2018 federal tax return. He resigned his House seat earlier that month.

The plea agreement detailed how Lewis, previously the powerful House Rules Committee chairman, acknowledged taking $65,000 from his campaign coffers in 2018 and put them in a bank account he opened using a fictitious entity whose title appeared similar to the state Republican Party. That money was then used by Lewis Farms and to pay the rent on his home.

Earlier in 2018, Lewis made about $300,000 in transfers from his campaign account to his bank account for his farm, according to court documents. These actions are not part of the plea. Lewis, a chief legislative author of Republican redistricting plans during the 2010s, repaid his campaign account and sent $65,000 in funds to the state Republican Party as he had reported on state campaign finance reports.

While Lewis’ “criminal conduct was both serious and willful, neither the defendant’s campaign nor any financial institution suffered a loss, he admitted his wrongdoing before an indictment was presented to a grand jury, and he accepted responsibility for his actions by pleading guilty and resigning” his House seat, the prosecutors wrote Tuesday in recommending probation. The U.S. Justice Department’s public integrity office was involved in the case.

Lewis’ attorneys described their client as a man trying to save his fourth-generation family farm after damage from two hurricanes, while being diagnosed with thyroid cancer and seeing legislative responsibilities expand, particularly with redistricting litigation.

“To save the family farm from these confluent spirals, he made the single worst decision of his life: he temporarily diverted campaign funds to personal use before repatriating them to their normal end,” attorneys Josh Howard and Gavin Bell wrote. Lewis, now 50, has been trying to save the farm since resigning from the legislature and his thyroid issues continue, they said.