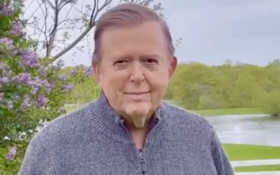 The former Fox News host has returned to social media with another message for his fans.

Of course it’s no secret that Lou Dobbs was strangely canned from Fox News unceremoniously amid the fallout from 2020 election.

Many had no idea if or when they’d ever see Dobbs in the public eye again.

Thursday the longtime news host recently took to Twitter in what seemed like a tease toward the future.

The message began as a seemingly innocent one.

“I’d like to thank all the great Americans who have reached out over the past few months,” he wrote along with his video message.

“And millions of our fellow citizens are still in deep pain. Our hearts go out to them and I want to take a moment, if I may, to say to you, thank you — for your generous support and your loyalty over these many years —  and in particular, these last few months.”

“And I want to assure you at the same time — our journey together is far from over.”

“We’ll see you soon,” he finished. “Thank you and god bless America.”

You can take a look at his message below:

I’d like to thank all the great Americans who have reached out over the past few months pic.twitter.com/p8dQrhSAgm

Could he be returning to network television soon?

Or could he go down the path of former Fox personality Bill O’Reilly with his own platform?

Do you want to see Lou Dobbs return to TV?