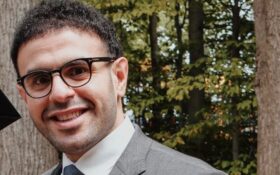 After his arrest in 2013 for documenting the deadliest crackdown on protesters in Egypt’s modern history, Mohamed Soltan landed in a notorious prison where he says he was brutally tortured for 21 months.

He never thought he’d get a chance to fight back, let alone make it out alive.

The 1991 Torture Victims Protection Act allows for victims of torture and extrajudicial killings committed by foreign officials abroad to seek justice through the American court system.

It’s the first such case against an Egyptian official, made possible by the grim coincidence that el-Beblawi now lives just miles from Soltan, in Washington, where he is an executive director of the International Monetary Fund.

“He’s completely gotten away with it, and is walking free downtown,” Soltan said. “I just want to regain some of the justice and dignity stripped away from me.”

El-Beblawi, contacted through the IMF, did not immediately respond to a request for comment.

In the summer of 2013, after the military-led ouster of the country’s first democratically elected but divisive president, Mohamed Morsi, Egyptian security officers descended on a protest camp packed with his Islamist supporters, killing hundreds. Soltan, an Ohio State graduate and the son of a prominent member of the now-outlawed Muslim Brotherhood, was shot in the arm while working as a stringer for Western news organizations in Rabaa al-Adawiya Square.

Before long he was picked up by security forces. In a mass trial widely condemned by human rights groups, Soltan was sentenced to life in prison on charges of spreading “fake news” to tarnish Egypt’s image.

In the maximum-security Tora prison complex, Soltan says he endured unspeakable torments overseen by el-Beblawi and other high-ranking officers. He says he was denied medical care for his festering bullet wound, beaten to unconsciousness, held in solitary confinement and forced to listen to the sounds of his father being tortured in a nearby cell. He lost 160 pounds over the course of a 16-month hunger strike to protest his unjust imprisonment.

Under pressure from the Obama administration, Egypt released Soltan in 2015, although his father remains in prison. He has attempted to build a new life in Virginia, advocating for fellow political prisoners still in Egypt and pursuing a master’s degree at Georgetown University. But memories from his dark cell in Tora still haunt him.

“There’s this perpetual, compounded trauma every single day,” he said, “where you get up and look in the mirror and see the scars and cigarette burns and the bullet marks…it changes you.”

Eric Lewis, a lawyer with Lewis Baach Kaufmann Middlemiss, who represents Soltan, says he hopes the case sends a message to Egypt’s government “that they cannot commit crimes against humanity and then seek haven in the United States.”

An estimated 60,000 political prisoners languish in Egypt’s jails, according to Human Rights Watch, including many journalists and critics held on vague terrorism charges without trial. President Abdel-Fattah el-Sissi, who came to power in 2013, has waged an unprecedented crackdown on dissent.

The lawsuit lists el-Sissi, intelligence chief Abbas Kamel and three other former senior security officials as culpable, saying that they can be served if they set foot in the United States.