Ex-cops detained after controversial arrest of journalist - The Horn News 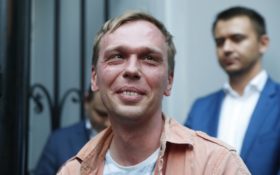 Russia’s Investigative Committee on Wednesday detained five former police officers involved in a controversial drug arrest of a prominent investigative journalist last year and said they will be charged with fabricating evidence.

Ivan Golunov, 37, was arrested in June 2019 in Moscow on drug-dealing charges that he rejected as a sham. The journalist argued the drugs found in his backpack and his apartment were planted by the police in revenge for his investigations of corruption in Moscow’s law enforcement community.

Several days of mass protests in Russia’s capital erupted following his arrest before the charges against Golunov were dropped as the Russian government admitted there was no evidence to support them. Golunov and his colleagues from the independent Meduza online outlet vowed to bring those who orchestrated the arrest to justice.

Committee spokeswoman Svetlana Petrenko told reporters on Wednesday the officers “illegally acquired, stored and transported” the drugs in order to plant them on Golunov, “with the goal of unlawfully prosecuting” the journalist.

Wednesday’s detentions came almost seven months after Golunov was released and a probe was launched into his arrest.

Golunov has repeatedly complained about the police stalling the investigation. In November, the journalist sued the police for “lack of action” in the case, but to no avail. At the same time his lawyers discovered the investigation was classified as secret, something police in Russia rarely do when it comes to criminal cases that don’t involve state secrets.