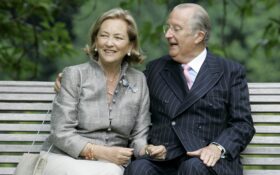 The long-running royal scandal that has riveted Belgium and damaged those involved reached a new milestone when former King Albert II reunited with the daughter he fathered out of wedlock over half a century ago.

Capping a momentous few weeks, Albert II, sat in between his wife Queen Paola and the former Delphine Boel, who is now recognized as Her Royal Highness Princess Delphine after a bitter two-decade paternity fight.

“After the tumult, the suffering and the hurt, it is time for forgiveness, healing and reconciliation,” the three said in a joint statement issued by the Royal Palace on Tuesday, two days after the meeting.

“Together, we decided to take this new path. It will require patience and effort, but we are determined,” they said.

Last month, a Belgian court ruled in Princess Delphine’s favor and officially recognized her as the daughter of King Albert II, something the aging monarch had fought tooth and nail to avoid ever since paternity rumors became public in 1998.

Princess Delphine, 52, is an artist known for her quirky, sometimes outrageous, statues. Albert II, 86, was king until 2013.

The gathering Sunday was soon followed by a reportedly warm meeting with her half-brother, the reigning King Phillipe, at the palace.

Rumors about Albert and Princess Delphine’s mother, the aristocratic wife of a wealthy industrialist, had been around for years but Albert long refused to recognize her.

Princess Delphine said going to court was all about getting family recognition and the love of a father who had for too long cold-shouldered her and fought her in court. She said it made her life “most painful.”

Sunday’s photo of the encounter showed the three in front of a fireplace with cookies, untouched, on the table. All three sat apart and their smiles were not exuberant, yet it was a watershed moment for Belgium’s royal house.

“During our encounter at the Belvedere Castle, each of us, with empathy and in serenity, was able to express their feelings and experiences,” the statement said. “A new chapter had opened, rich in emotions, peace of mind, understanding and hope.”